Turkey inflation proves stubborn at close to 9 pc in June 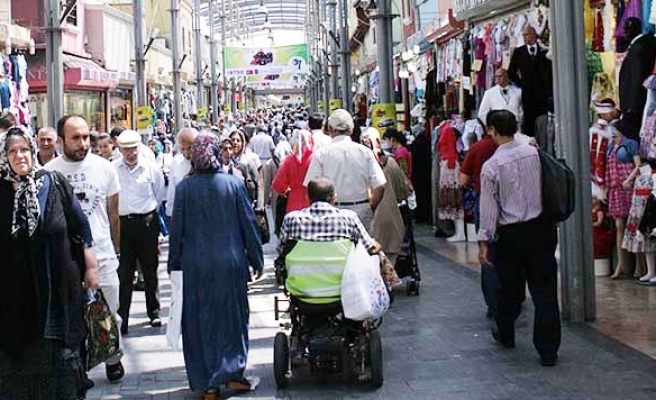 Annualized consumer inflation saw a mild rebound to nearly 9 percent in June, indicating that meeting the year-end target of 5 percent will be a difficult task for the Central Bank of Turkey, even as crude prices remained much lower for the sixth month than they were at the beginning of the year.

According to its data, the Consumer Price Index (CPI) actually decreased by 0.9 percent from May to June, but was 8.87 percent higher than in the same month a year ago, representing a minor increase in the annualized rate, which was 8.2 percent a month earlier.

Among consumer goods in June, non-alcoholic beverages (3.42 percent), transportation (1.39 percent) and clothing and shoes (0.82 percent) saw a price reduction. At the other end of the scale, communication prices took the lead with a 1.92 percent hike in the sixth month over the fifth.

The June Producer Price Index (PPI) likewise dropped by 1.49 percent compared to May, and was 6.44 percent higher year-on-year. The annualized increase in PPI was 8.06 percent in May. Production costs increased for communication equipment (2.97 percent), potable water (2.13 percent) and furniture (1.89 percent) in June over May. Producers, however, paid notably fewer input cost in the fields of crude oil and natural gas extraction (8.63 percent), charcoal and refined petroleum products (7.04 percent).

Inflation in Turkey is dependent on multiple variables, but among them energy prices are generally game-changers. A barrel of crude was at nearly $80 for the month of June, compared to some $100 in January.

The major factor behind Turkey's intractably high consumer inflation is the rapid expansion of the gross domestic product (GDP) for the past decade. The national economy expanded by 5.4 percent on average each year between 2002 and 2011. Last year's 8.5 percent GDP growth, on top of the 8.9 percent increase recorded a year earlier, made Turkey the fastest-growing economy in all of Europe and within the larger Organization for Economic Cooperation and Development (OECD). For the first quarter of this year, however, the economic growth rate slowed to 3.2 percent, extending a helping hand to the policymakers as they try to beat inflation.

Central Bank Governor Erdem Başçı had predicted in April that people would see decreasing inflation in the country in the second half of 2012, and that the pace of decline would peak particularly in the last three months of the year.