The line has been designed and built by Turkish contractors and engineers, and it is the fastest constructed high-speed railway in the world. 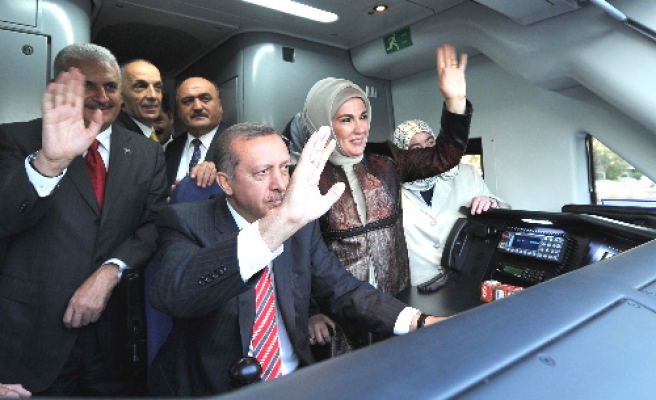 Turkey launched services Tuesday on a new high-speed train rail that links the Turkish capital, Ankara, and the central city of Konya.

Speaking at the ceremony, Erdogan said the construction of the 212-kilometer high-speed railway and the test runs had taken only four and a half years to complete, which he said was significantly shorter than most of such projects elsewhere in the world, citing a 204-km line between Italy's Rome and Naples that has taken 11 years and another 216-km line between Germany's Hanover and Berlin which has taken 7 years.

Erdogan said the high-speed train would reduce travel time between the two cities to one and a half hour from ten and a half hours in the past when the old train services from Konya reached Ankara only after stopping at the central cities of first Eskisehir and then Afyon.

The line has been designed and built by Turkish contractors and engineers, and it is the fastest constructed high-speed railway in the world.

The project for the railway had cost one billion Turkish liras.