Looking at economic indicators alone is insufficient to get a clear idea about the health of an economy, Deputy Prime Minister Ali Babacan has said 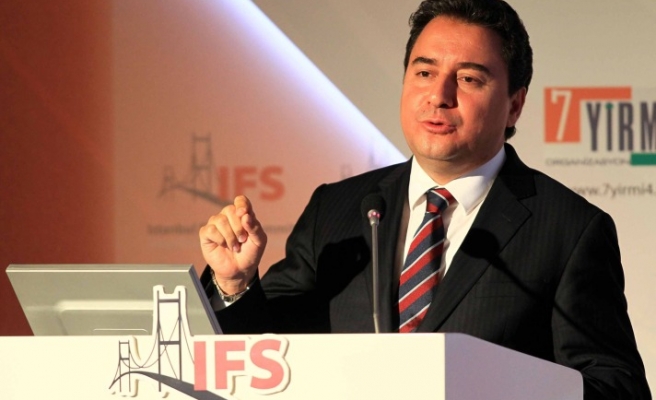 Deputy Prime Minister Ali Babacan has said the recent growth rates of the Turkish economy have been pretty much in line with year-end targets but that the quality of growth needs special attention.

Sharing remarks on Turkey's gross domestic product (GDP) expansion, which was 2.9 percent in the first quarter of 2013 and 4.4 percent in the second quarter, the minister said: “The picture is not dire, but there are concerns regarding the quality of growth. We need to spend intensive efforts about this.” He called on all actors in the economy to adjust their budgets accordingly.

The minister was speaking at the first day of the 4th İstanbul Finance Summit (IFS) on Tuesday.

The quality of growth is far more important than growth itself, the minister underlined. Looking at economic indicators alone is insufficient to get a clear idea about the health of an economy, he said. “For instance, is it possible to say how successful an economy is that registers 7 percent growth? Financial, social and environmental sustainability are also very significant [factors to consider]. Some are saying, ‘Let's grow well this year and have good employment data, and who cares about next year',” Babacan said.

He went on to explain that rather than such a superficial approach, one must focus on the sources of growth, such as whether it is a result of public sector expenditures or private sector investments; whether it is financed by the country's own resources or through external financing; in what direction public sector borrowing and private sector and household debts are heading, etc. “It is quite important to be able to answer to these questions; otherwise, encountering financial risks is quite likely,” the minister said.

On the dynamics of the Turkish economy, Babacan said economic expansion depends not on consumption but on production, not on domestic demand but on foreign trade.

Growth is necessary, but improved prosperity and welfare, education reform, justice and social security and increased sensitivity toward the environment are also crucial points that need greater attention, Babacan underlined. ‘Turkey felt the pinch more due to high CAD'

Capital outflows have hurt Turkey more than many other emerging economies due to its high current account deficit (CAD), but its solid financial system, prudent fiscal policies and timely steps by the central bank have limited the harm caused by this movement of capital and will continue to do so, Babacan said.

He pointed to large capital outflows from emerging countries since May 22, when the US Federal Reserve first signaled an end to its monetary easing policies. Figures indicate that the capital outflows are not at dramatically high levels compared to the GDPs or total financing capabilities of developing nations. “We see this development as a re-pricing of assets,” he noted.

Babacan said the world is now entering a period in which interest rates will start to rise. “Bond, treasury bills and stock prices are in search of a new balance. That is to say, the recent developments in the markets are not a surprise because this era marks the start of recovery in the world and a time in which central banks are changing the direction of their policies,” he noted.

“Whatever the scenario, the dynamism of developing nations, their demographics and competitive power are great sources for superiority,” the minister added. Lethargy for reforms poses biggest risk for EU

The global markets have been extremely jittery recently due mostly to ambiguities as to the possible policy the Federal Reserve will adopt, Babacan argued. He also cited the ever-changing statements from European policymakers on developments and problems of communication among them as the other factors that cause oscillations and tension in the global economy and markets.

“Looking at the European Union, we have seen a partial recovery in recent months but there are no concrete data at hand to help us assess whether this recuperation will be permanent. Yet again we were able to see 0.3 percent growth in the eurozone and 0.3 percent growth in the European Union after a consecutive six-quarter recession. Notwithstanding, there are still problems in the periphery countries.”

Babacan warned against the lethargy in the EU on enacting reforms that has risen as a consequence of the European Central Bank's commitment to do whatever it takes to turn things around. The result was drops in interest rates, which ended in sluggishness among market players to demand more reforms from their governments or overconfidence in the central bank, he noted. For the minister, a decline in pressure on policymakers causes them, and particularly governments in the EU, to put off launching and implementing the necessary reforms. “I think it is very useful to stress that the most important source of risk for the eurozone is this lethargy,” he asserted.

Babacan also reiterated the commitment of the government not to make any concessions in its budget discipline ahead of the local elections in 2014. “We already have a large current account deficit, and if a budget deficit is added to it, financial and economic stability will sustain serious damage,” he underlined.

The minister also spoke on the prospects of two state banks, Ziraat and Halk Bankası, founding a participation bank, saying the plans will materialize in 2014. He also said the privatization of the Borsa İstanbul will most likely take place in 2015.

Borsa İstanbul President İbrahim Turhan also delivered a speech in which he highlighted the necessity of increasing the numbers of corporate and individual investors in the stock market. “Stable, predictable environments are mostly affected by extreme volatility and the most important factor in curbing this is the expansion of the base of corporate investors. The total portfolio of corporate investors in Turkey to its GDP is 4 percent, but this is 50 percent in the EU,” he asserted.

Turkish Exporters Assembly (TİM) Chairman Mehmet Büyükekşi spoke about financing foreign trade. He said exporters' need for financing to be able to keep up production has increased to a staggering rate of 45 percent and added that meeting this demand will positively affect employment while reducing the CAD.

IFS Advisory Committee head Murat Yülek noted in his speech that the global economic agenda has been occupied mostly by the Fed's decision to taper its quantitative easing policy. The extreme reaction in emerging markets to the Fed's decision has triggered important changes on both the assets and monetary markets of these countries, he noted, adding, “We are asking if the Fed has become a global central bank considering that it causes such big waves in these countries when it constricts liquidity.”

The IFS, which was first organized in 2010 as a part of efforts to make İstanbul a regional financial hub and as a regional alternative to the World Economic Forum in Davos, hosted government officials, academics and economists from 13 countries this year. The main theme of the summit was “financing sustainable growth.” The Turkish government showed great interest in the summit. Along with Babacan, Development Minister Cevdet Yılmaz, Finance Minister Mehmet Şimşek, Economy Minister Zafer Çağlayan and Deputy Prime Minister Bülent Arınç participated in the two-day summit.