Turkish FM Mevlut Cavusoglu said a "safe zone" established by the U.N. in Syria is crucial to providing refugees with and acceptable standards of living. 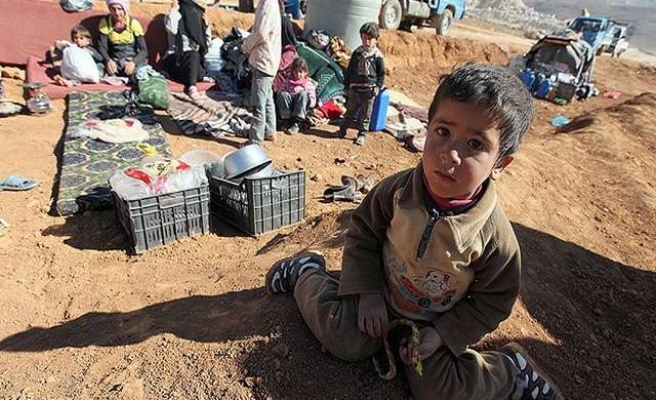 A "safe zone" in Syria, established by the U.N., is crucial to providing refugees with an acceptable standards of living, Turkey's foreign minister said Thursday.

There is still not a resolution on the "safe zone" to be established for Syrian refugees, said Mevlut Cavusoglu, but deliberations on the issue continue.

"We have discussed the issue of a safe zone both in bilateral meetings with high-level states officials and international organizations representatives," Cavusoglu said during an interview with the Turkish broadcaster TRT, on the sidelines of the United Nations General Assembly. He added that Turkey cannot afford to supply all the needs of the refugees and cannot act like the U.N.

"Providing tents and camps to these people is not sufficient," he said. "In Turkey, we try to give the same services to the 1.5 million refugees as we provide our citizens, including education and health, but still it has to be regulated and standardized."

Cavusoglu said that if the children in the camps are not provided with a standard quality education, their future will be endangered, and being uneducated, they could potentially end up in the hands of a terror group.

As Turkey seeks the 2015-2016 Security Council temporary membership, the minister said his country held meetings with the delegations of several countries to try to sway their votes for Turkey.

Turkey's position against ISIL not changed

Cavusoglu rejected the suggestion by some that Turkey's position hardened against the ISIL, only after 49 diplomatic personnel held captive by the terror group were rescued.

Turkey's position was clear from the very beginning of the crisis, he said. "Our analyses and findings in this respect are not new. We have shared all these findings with our allies in several platforms for four years."

He noted that the international community did not foresee what Turkey actually did and as the ISIL threat grew other countries began to feel the gravity of the threat.

Cavusoglu also said that some of allies of Turkey, particularly the U.S., have expressed regret for not taking his country’s recommendations into consideration.

"While the name of ISIL was not even so known, we in October 2013 designated ISIL as a terrorist organization with a resolution by the Cabinet," Cavusoglu said. "The states which are now threatened by the ISIL were not really aware of ISIL or had different attitudes toward this group."

He also added that as a country that experienced the threat of terrorism for decades, Turkey's attitude cannot change in respect to terror groups.

Cavusoglu said there should be no distinction among terror groups as they are all the same in terms of terrorizing people and countries.

"We are against the efforts of legitimizing some terror groups just because they are fighting ISIL," implying the outlawed Kurdistan Worker's Party or PKK, which have been fighting ISIL both in Syria and Iraq.

More than 40,000 people have been killed in the 30-year-old conflict between the PKK and the Turkish armed forces in Turkey's southeast. The group is also on the list of terrorist organizations of the U.S. and the European Union.

During the interview Cavusoglu also dismissed reports that a Turkish delegation requested a meeting with Egyptian officials in New York.

"Recently, I came together with Egyptian Foreign Minister Sameh Hassan Shoukry in Jeddah and Paris where we held meetings on the situation in Iraq and Syria," Cavusoglu said. "During these meetings we agreed to have a meeting in New York on the sidelines of the UN General Assembly."

He said it appears, however, that Egyptian officials have spun a story to portray it as if Turkey requested a meeting with Egypt. As a result, Cavusoglu said, there would be no meeting between the two countries.