Secretary General of the Organization for Economic Co-operation and Development Angel Gurria said Turkey was the strongest country in the OECD in 2010. 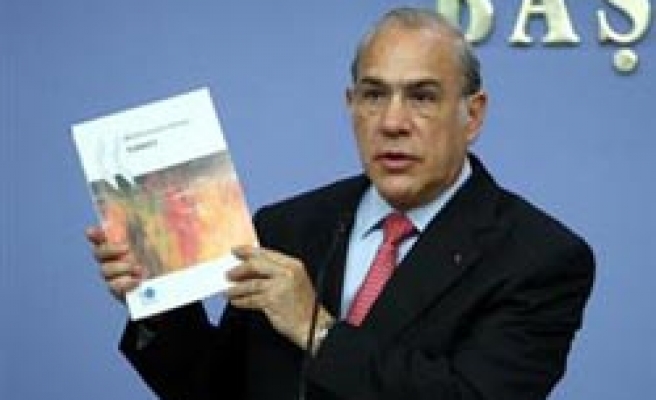 Secretary General of the Organization for Economic Co-operation and Development (OECD) Angel Gurria said Wednesday Turkey was the strongest country in the OECD in 2010.

Speaking at the press conference, Babacan said that the OECD published country reports every two years and that these reports included wide analysis.

Such reports are not prepared merely for Turkey but for a total of 40 countries, Babacan said.

The OECD reports include objective and scientific analysis and proposals. We pay high attention to these reports and have made use of them in the past. We will continue to benefit from the reports, Babacan said.

The most recent report on Turkey was published in 2008. OECD's 2010 report will be presented by Secretary General Angel Gurria, Babacan said.

We analyze countries and as a result believe that in Europe the German and Turkish economies will remain strong while the economies of United States, Canada and Japan will shrink, Gurria said.

The growth in many OECD countries did not meet expectations but Turkey was an exception, Gurria stressed.

Turkey realized an impressive crisis management. The fiscal reforms implemented after 2002 made great contribution to Turkey's success in dealing with the crisis, Gurria underlined.

Turkey's growth of 11 percent in the first six months of 2010 was very impressive.

We were proud with such figures from Turkey. We were actually expecting a growth rate of seven percent. We can see a very positive picture in Turkey, Gurria said.

He said Turkey worked hard to overcome the global financial crisis, and OECD's guidance had also been effective in Turkey's economic growth.

Sahin said new arrangements on economy including the Turkish Code of Commerce and the bill on Turkish Code of Obligations would be brought to parliament floor in the new legislative year adding that those would make contributions to the Turkish economy.

He said further cooperation between developing and developed countries was important in overcoming the financial crisis.

Guirra in his part said all their reports and suggestions aimed at making Turkey's success story and economic growth lasting, adding that those mainly focused on the architectural structure of the economy.

Guirra said Turkey emerged as an attractive country for investments.

Guirra invited Sahin to attend the OECD Forum in Paris on May 23, 2011.