Turkey to stand 'shoulder to shoulder' with Azerbaijan 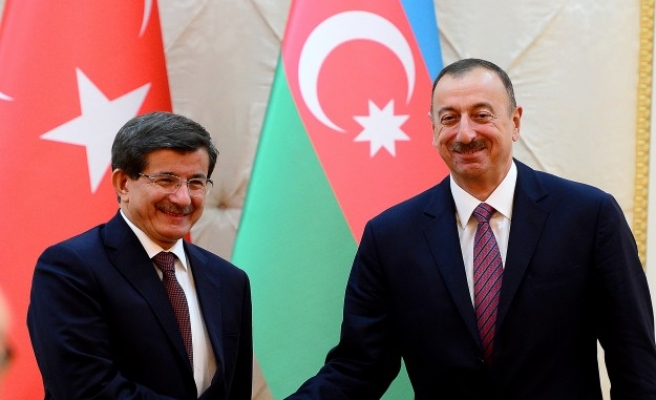 The Turkish leader was speaking at a joint press conference following a meeting with President Ilham Aliev in the Azerbaijani capital Baku.

Regarding the long-running Nagorno-Karabakh dispute Davutoglu said: “Turkey will stand by Azerbaijan's struggle until the last centimeter of its territory is liberated.”

Azerbaijan and Armenia, two former Soviet republics, fought a war between 1988 and 1994 over the disputed Nagorno-Karabakh region, which is a de jure territory of Azerbaijan but remains under de facto Armenian control.

Davutoglu said: “Turkey and Azerbaijan will work shoulder to shoulder until the wider region is converted into a region of peace and requirements of international law are fulfilled.

"If Azerbaijan feels any pain, the same is felt in Turkey's heart."

The Turkish PM was referring to the most recent clashes on border of the disputed region in late July, where thirteen soldiers from the Azerbaijani side and more soldiers from Armenia were killed, according to Azerbaijan's Ministry of Defense.

The last agreement for a peaceful settlement to the Nagorno-Karabakh conflict was signed in Moscow in 2008. Armenia and Azerbaijan originally signed a ceasefire in 1994 but never agreed a peace settlement. The two countries currently do not have diplomatic relations.

President Ilham Aliyev spoke of the conflict affecting energy development in the region: "Armenia has been isolated from cooperation projects among regional countries because of its occupying attitude.

“Our projects in the energy field are important, not only for our country, but for the world also."

A ground breaking ceremony for the high-profile Trans Anatolian Natural Gas Pipeline project will be held on Saturday. Aliyev said: "September 20 is a historic day for us. We had signed the project of the 20th century 20 years ago on 20 September; we are starting the project of the 21st century in which Turkey and Azerbaijan have assumed a major role.”