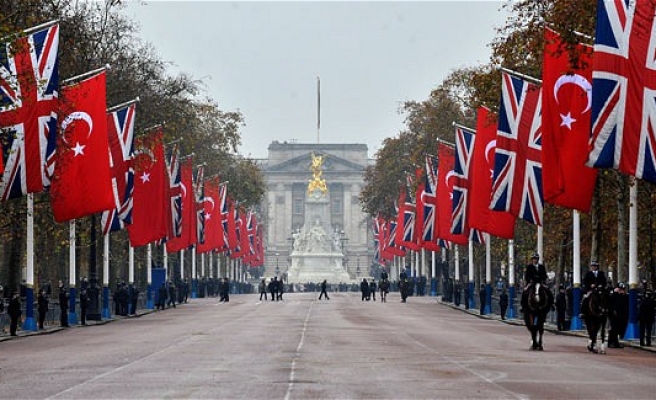 Britain’s ambassador to Turkey has praised the economic ties between his country and Ankara, saying the U.K. “has a lot to offer to Turkey in terms of partnership”.

Richard Moore was speaking during a two-day economic conference which gathered experts and academics from the banking and insurance sectors in Istanbul on Thursday.

“I think there is a huge potential for partnership around Islamic finance, participation banking and insurance where the U.K. and London is the leader in the Western world developing production,” he said.

“At the center of that there is a real commitment on the U.K.’s part to support Turkey’s ambition to turn Istanbul an international financial center.”

He added that the Turkish economy had developed: “The financial sector, particularly the banking sector, has really proved its worth, I think, in recent years,” he said.

“You went through very difficult times in the 1990s and you reformed your banking system at the time so when we came to the big crisis in 2008, you did remarkably well.”

Moore stated that the Istanbul stock exchange and the country’s banking sector have “made important progress in insurance and pension sector”.

“Those sectors are a little undercooked and there is still plenty of room for growth and developments in those areas,” he added.

Another keynote speaker at the event was John Nelson, chairman of Lloyd’s, the world’s leading market for specialist insurance and reinsurance.

He mentioned the importance of different levels of insurance penetration.

“While the U.S., the U.K and New Zealand and Chile have a high level of insurance penetration, Turkey certainly does not,” he said.

He said that risks were becoming more concentrated, making economies and business more vulnerable to “catastrophic and systemic shock”.

“The nature of the risk is changing,” he added.

Nelson said that as the Turkish economy expanded, so did the value of the assets and infrastructure requiring protection.

“In Istanbul alone $82.5 billion of the city’s projected annual GDP of around $500 billion is at risk from these 18 threats with earthquakes, human pandemics, [and a] stock market crash are in the top five, in terms of a financial impact,” he added.

“This represents a substantial potential drag on Istanbul’s future economic growth,” he said.

Speaking at the same event, Abdurrahman Bilgic, ambassador of Turkey to the U.K., said that bilateral relations between the two countries were very strong.

“There is every reason to believe that the relationship between Turkey and the U.K. will become even stronger in the year ahead,” he said:

“And finance is one of the key areas which promises the best opportunities for strengthening our bilateral cooperation.”