Turkey's PM wants Egypt to be included in Nabucco project 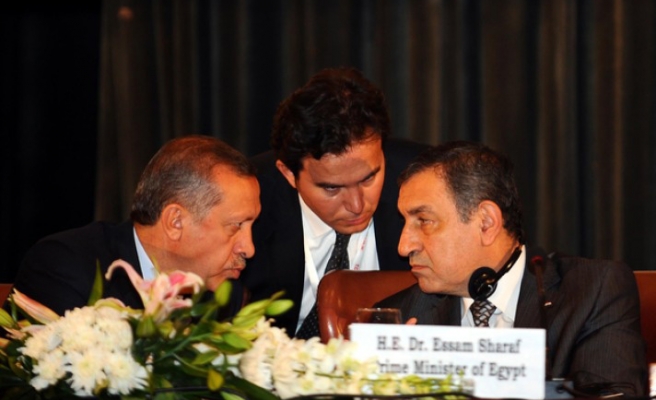 Turkish Prime Minister Recep Tayyip Erdogan has said that his government increased the efficiency and productivity of Turkey's economy by making comprehensive reforms, carrying out new arrangements in banking sector and combatting against poverty and corruption in the last nine years.

"We recovered from the global crisis faster than many countries since we learnt our lessons from the economic crisis in 2001. The measures we took under the light of our experience from the crisis in 2001, our strict financial discipline and our political stability helped us to recover from the global financial crisis," he said at Turkey-Egypt Business Forum in Cairo.

"Our government increased the efficiency and productivity of Turkey's economy by making comprehensive reforms, carrying out new arrangements in banking sector and combatting against poverty and corruption in the last nine years. We have reached a good level in our gross domestic product. We paved the way for foreign investors," he said.

"While the industrialized countries grew by 1.5 percent in 2010, Turkey's growth rate increased to 11 percent in the first quarter of 2011 and to 8 percent in the second quarter. Our country became the world's fastest growing country. I believe that Egypt has the same potential. I also believe that Egypt will become the one of the most powerful economies of the world once again after the structural reforms. Therefore, upcoming election in Egypt is of vital importance. As you know, stability and confidence are the most important elements for economy. Economy can grow only in an atmosphere of stability and confidence. Turkey will extend full support to Egypt in this process," he said.

Referring to Turkey-Egypt economic cooperation, Prime Minister Erdogan said, "Turkish investments in Egypt increased to $1.5 billion from $60 million in the last five years. There is a vast area from the south of Egypt to north of Turkey."

"Turkish construction sector has reached a business volume of $180 billion in 83 countries in five continents. Turkey ranked second in the list of the world's biggest international construction companies with 33 firms. Our contractors have undertaken projects in Egypt worth of $600 million," he said.

"Recently, Turkey has made a great progress in health tourism. I believe that Egyptian people can also benefit from Turkey's cheap and qualified services in health sector. Number of Turkish tourists visiting Egypt last year increased 38 percent to 64,000 while number of Egyptian people visiting Turkey decreased to 62,000. We need to cooperate in tourism. We can promote our countries' historical, cultural and natural assets to our people. Istanbul does not consists of only the Istanbul Strait, the Blue Mosque and the Topkapi Palace. And Egypt does not consist of only the Nile, pyramids and museums," he said.

"Annual number of tourists visiting Turkey has increased to 30 million from 13 million since the day we came to the political power," Erdogan added.

Egyptian Prime Minister Essam Abdel Aziz Sharaf, on his part, said Turkey-Egypt cooperation was essential for the future of the region.

He said that Turkey and Egypt had a great potential of market with a labor power of 150 million.

"All we have to do is to use our potential," he added.