Caglayan visited the Microsoft headquarters in Seattle as part of his visit to the USA. 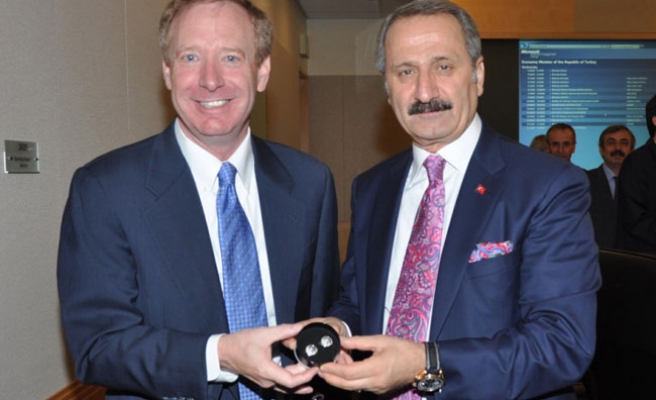 Turkish Economy Minister Zafer Caglayan has said that the world's leading software companies Microsoft and Apple were willing to be a part of the Fatih Project for distribution of 15 million tablet PCs.

Caglayan visited the Microsoft headquarters in Seattle as part of his visit to the USA.

"I met the senior vice-president of the Microsoft. They are ready to take part in the Fatih Project. In case of an agreement, Microsoft teams will come to Turkey to cooperate with Turkish firms in the project," he said.

Later, Caglayan also visited the Apple which posted a profit of $65.2 billion in 2010.

"I think that the Apple is the most successful company about innovation. It is Apple which designed many products such as iPad, iPhone and iPod. Executives of the company are eager to cooperate with software companies in Turkey. Total sales of the Apple reached 220 million this year. Apple executives told the that Turkish manufacturing sector could take part in production of iPhone and iPad accessories. They are also interested in Fatih Project.

Under the Movement to Increase Opportunities and Technology (FATIH) project, the Turkish government plans to distribute 15 million tablet PCs to elementary school students in four years. The project seeks to increase standards and quality in education by using advanced technology such as electronic boards, projectors and a gradual transition to e-textbooks in classes. Turkey aims at producing those tablet PCs domestically.