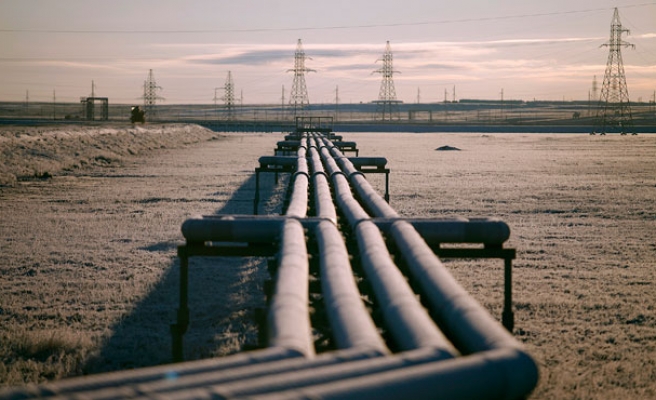 Turkish Foreign Minister Feridun Sinirlioglu has assured Azerbaijan that Turkey will do everything necessary to maintain the security of gas pipelines passing through its soil.

Addressing a joint press conference with his Azerbaijani counterpart Elmar Memmedyarov in the Azeri capital Baku Wednesday, Sinirlioglu described terrorism as an issue not only for Turkey but as a global threat.

"Turkey is taking required steps just like any other country to keep public order as part of anti-terrorism efforts to ensure its security," he said.

He said that Ankara had taken precautions to protect its infrastructure and energy projects in Turkey from possible terrorist attacks.

"We deem the safety of the pipelines like the Trans-Anatolian Natural Gas Pipeline [TANAP] and Baku-Tbilisi-Ceyhan pipeline [BTC] as our own. We will take all necessary measures for them," he said.

TANAP, which is part of the Southern Gas corridor, will carry 16 billion cubic meters of natural gas from Azerbaijan's Shah Deniz II field to Europe via Turkey when it gets completed in 2018.

The BTC pipeline, which has a daily capacity of 1.2 million barrels of crude, carries oil from Azerbaijan and other countries in the Caucasus, namely Turkmenistan and Kazakhstan, to Turkey's southern port in Ceyhan, where it is exported via shipping vessels to international markets.

Turkey's eastern and southeastern regions have been hit by a wave of deadly terrorist attacks, targeting police and soldiers along with some attacks that hit gas pipelines in the east.

Sinirlioglu reiterated Turkey's resolve to closely consult with its strategic partner Azerbaijan on all world platforms.

Memmedyarov said that his talks with Sinirlioglu also touched upon the Baku-Tbilisi-Kars Railways project to connect the Azerbaijani capital with Turkey's eastern border province of Kars over Georgia.

"We believe Turkey will complete the project within a short time. The railways project is significant not only for us but also for Central Asia; Kazakistan, Kyrgyzstan and China also attach great importance to it," he added.