The new 6.5 km undersea tunnel will reduce travel time between the two sides of Istanbul via metro and highway lines to 14 minutes. 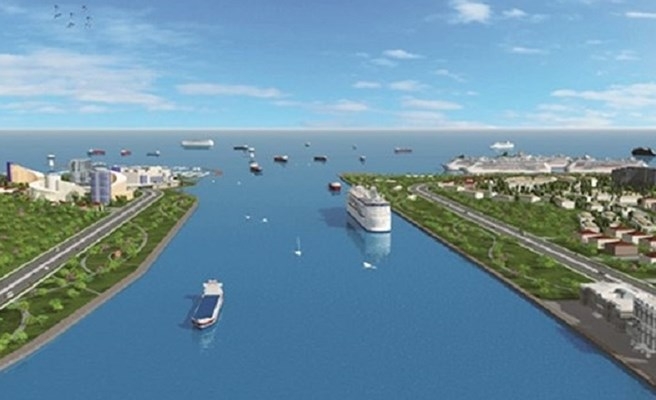 "The three-level mega project will be the signal flare of the Turkish Republic, the fourth global state in Istanbul after three empires," he told a Friday publicity meeting for the "Grand Istanbul Tunnel" at Istanbul Congress Center.

Davutoglu described the 6.5 km-long tunnel as the first of its kind in the world, as it is comprised of one rail system between two highways for motor vehicles 110 meters under the Bosphorus Strait.

He stressed that Bosphorus Bridge, Fatih Sultan Mehmet Bridge and the Yavuz Sultan Selim bridge (currently under construction) will be connected to each other once the tunnel is completed.

"The tunnel will both reduce the traffic load on the bridges and enable maximized time saving," he said.

The premier further said the tunnel will connect Istanbul's three airports as well as the mega city's main axes of nine rail systems with the land routes.

Davutoglu announced that the transportation capacity of the tunnel will be 6.5 million passengers, adding that the structure will increase the annual figure criss-crossing Istanbul’s two sides from 1.6 million to 4 million.

He also touched upon the project’s green credentials, which is expected to curb the greenhouse gases by 110,000 tons a year.

The new route will shorten the journey time to 14 minutes between Arnavutkoy district on the European side and Kucuksu district on the Anatolian side, where the tunnel exits will be built.

As for security in the tunnel, Davutoglu said fire detection and alarm systems and surveillance cameras will be placed all along its length as well as waiting spots every 500 meters.

The railway level of the tunnel will also be equipped with automatic signaling and auto-deceleration and acceleration systems.

The premier added that the tender bids for the project will be completed before the June 7 general election.

He said they aim to complete the overall project and put the tunnel into service within five years.

Speaking at the opening of the publicity meeting, Transportation, Maritime and Communications Minister Lutfi Elvan said the mega project is the product of around 10 months of intense work where they analyzed Istanbul's route profile and the demands of the passengers.

Elvan emphasized that the tunnel will the raise the role of railway system in public transportation.

The minister said the sub-sea tunnel will be constructed with a "build-operate-transfer model" -- a form public-private-partnership scheme -- so "the state will not pay a single penny."