Leuthard said Switzerland wanted to make cooperation with Turkey particularly on new energy resources so that security of supply could be ensured. 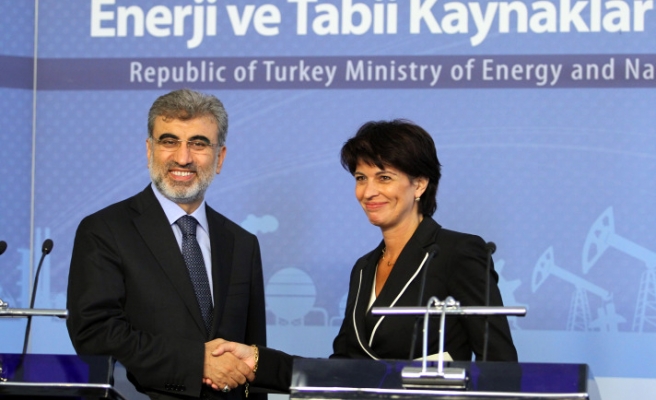 Turkey's energy minister said on Wednesday that energy productivity and developments related to renewable energy resources were discussed during his meeting with Chief of Federal Department of Transportation, Communications, & Energy Doris Leuthard of Switzerland in Ankara.

"We assessed what kind of relations we can develop between Turkey and Switzerland on energy issues," Energy & Natural Resources Minister Taner Yildiz told reporters after his meeting with Leuthard.

When reminded of the decision of Switzerland to phase out nuclear power, Yildiz said Turkey's determination on nuclear power plants still continued.

Yildiz said when Akkuyu nuclear power plant was constructed, an installed power which would correspond Turkey's one-year growth would be obtained. "Nuclear is a part of lessening dependence on foreign sources. We are trying to drop share of natural gas in electricity generation and obtain electricity from nuclear," he said.

Asked when the drop in crude oil prices would be reflected on fuel prices, Yildiz said price per barrel of crude oil was around 104-105 USD at the time being. He said there would be a reduction when there was drop both in oil prices and foreign exchange rates.

Swiss minister said there were common fields of interest between Turkey and Switzerland with the memorandum of understanding signed in 2009. She said they exchanged views on the matters in question in their meeting.

Leuthard said Switzerland decided to withdraw from nuclear power following the incidents at Fukushima nuclear power plant (which was hit by a massive earthquake and tsunami disaster.) She said the deficit should have to be met by various methods.

Leuthard said Switzerland wanted to make cooperation with Turkey particularly on new energy resources so that security of supply could be ensured.

Commenting on Turkey's nuclear power plant project, Leuthard said conditions of every country were different, noting that countries had to make decisions according to their own conditions.