The bank, which said it would beef up risk controls under an accelerated restructuring of that part of its business, named its Europe, Middle East and Africa head Sergio Ermotti to replace Gruebel on an interim basis. 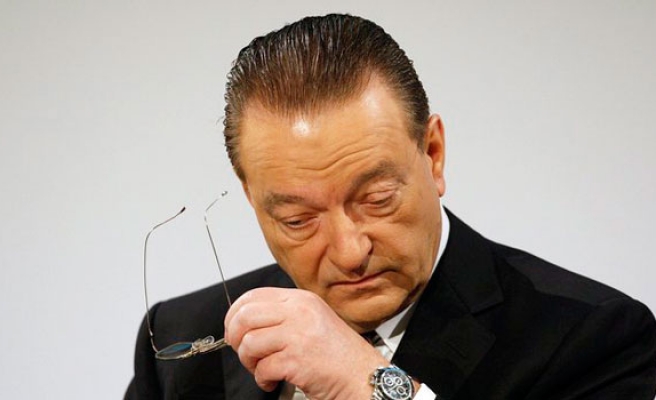 The bank, which said it would beef up risk controls under an accelerated restructuring of that part of its business, named its Europe, Middle East and Africa head Sergio Ermotti to replace Gruebel on an interim basis.

"Oswald Gruebel feels that it is his duty to assume responsibility for the recent unauthorized trading incident. It is testimony to his uncompromising principles and integrity," UBS Chairman Kaspar Villiger said in a statement.

Gruebel, a 67-year-old former trader who helped turn around Credit Suisse a decade ago, was brought out of retirement in 2009 to try to revamp UBS after it almost collapsed in 2008 under the weight of more than $50 billion lost on toxic assets.

Ermotti, who Villiger said was a strong candidate to replace Gruebel permanently, told a conference call with journalists the bank would review its risk controls at group level, and an internal investigation of what went wrong at the investment bank should conclude within 14 days.

More details of changes at the division, which would not exit its fixed income business, would be revealed at the bank's Investor Day in November, Ermotti said.

Ermotti, a 51 year-old from Switzerland's Italian-speaking region of Ticino, was already being groomed as a possible successor since he joined UBS in April from UniCredit after he was passed over in a management reshuffle at the Italian bank following the departure of CEO Alessandro Profumo

Villiger said he had no doubts about the future of investment Banking head Carsten Kengeter, whose fate had also hung in the balance over the trading loss in his division, and that he did not favour splitting off the business from the rest of the bank.

The UBS board, which continued a meeting by telephone conference on Saturday that had started in Singapore this week, said it was "deeply disappointed" by the trading scandal.

"It will fully support the independent investigation and will ensure that mitigating measures are implemented to prevent such an incident from recurring," it said.

UBS trader Kweku Adoboli was "sorry beyond words for what had happened" and was "appalled at the scale of the consequences of his disastrous miscalculations", his lawyer Patrick Gibb said at a court hearing in London on Thursday.

The 31-year old did not enter a plea and was remanded in custody until a further hearing next month.

The board reconfirmed the bank's "integrated" strategy, combining wealth management, investment bank, asset management and Swiss retail and corporate businesses, but said it wanted to speed up a restructuring of investment banking.

The board said it had asked management to accelerate the implementation of a client-centric strategy for the investment bank "concentrating on advisory, capital markets, and client flow and solutions businesses".

"In the future, the Investment Bank will be less complex, carry less risk and use less capital to produce reliable returns and contribute more optimally to UBS's overall objectives," Villiger said.

UBS had already said in August it would axe 3,500 more jobs to shave 2 billion Swiss francs off annual costs, with almost half of those cuts coming from the investment bank, which had grown to almost 18,000 staff from 16,500 a year ago.

Ermotti said on Saturday UBS could cut more investment banking jobs, though reductions would not be extensive.

Clients pulled nearly 400 billion Swiss francs ($442 billion) -- almost 20 percent of total client assets -- from UBS after the bank was battered in the financial crisis as well as a prolonged dispute with the U.S. tax authorities and posted the biggest annual corporate loss in Swiss history.

Villiger said Gruebel had achieved an "impressive turnaround and strengthened UBS fundamentally". But other private banks are now circling again to nab clients worried about reputational risk in the wake of the rogue trader affair.

The board had not lost confidence in Gruebel, Villiger told Saturday's conference call, though the outgoing CEO would get no severance package.

UBS's largest shareholder, Singapore sovereign wealth fund GIC, met the bank's management earlier in the week and in a rare public statement expressed its disappointment. It urged them to take firm action to restore confidence and wanted details of how the bank would tighten risk controls.

GIC had not been consulted over Saturdayy's management change, Villiger said.

The board said it would continue to look for a permanent successor to Gruebel.

Villiger thanked Ermotti, who has worked in all UBS's core business areas, for standing in on an interim basis, adding: "Together with the executive leadership team he will continue to implement UBS's strategic alignment."

UBS's board meeting, one of four regular ones per year, had originally been due to end on Friday ahead of the UBS-sponsored Singapore Formula One motor racing Grand Prix on Sunday, when executives will be trying to reassure big clients.

In 2007, former UBS CEO Peter Wuffli was ousted unceremoniously at a board meeting in Spain to coincide with the America's Cup yachting event there, in which UBS was sponsoring a team.

The loss allegedly caused by Adoboli in unauthorised trades compares to the 4.9 billion euros ($6.6 billion) lost by rogue trader Jerome Kerviel at Societe Generale three years ago, an event that prompted calls for tighter rules and felled that bank's then-chairman and CEO Daniel Bouton.