Activists decry decision by Cambodia’s Ministry of Labour, one warning could lead to civil unrest 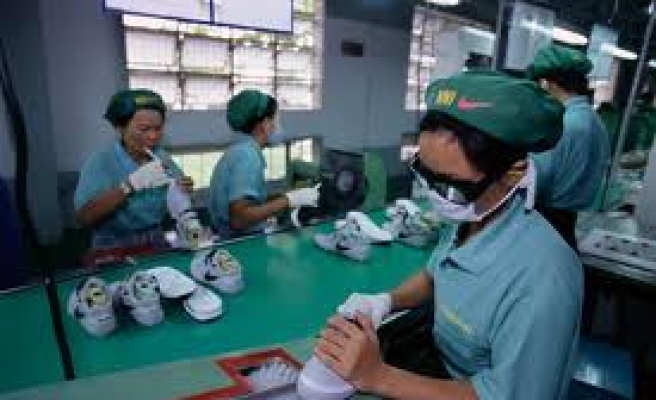 Activists have decried a decision by the Ministry of Labour to disregard union pleas for a hike in the minimum wage for some of the country’s 500,000 garment workers, one warning that it could lead to civil unrest.

Ath Thorn, president of the Cambodian Labour Confederation and the Coalition of Cambodian Apparel Workers Democratic Union, told The Anadolu Agency on Friday that "maybe a problem would happen" if the wage is set at either of two amounts put forth by the government and industry officials.

"We do not agree [with these amounts]," he said. If it is like that, then maybe… I don't know yet the scenario, but if it’s like that then we are upset. The workers are not happy with this amount," he said.

In December 2013, the minimum wage was set at $100, prompting workers and unionists to protest in their thousands. But the movement was violently shut down on January 4, when military police forces opened fire on striking workers, killing five people.

The Cambodia Daily reported Friday that a tripartite working group composed of unions, factory owners and government officials had held a secret ballot in Phnom Penh on Thursday and that the unions’ demand for $140 was scrapped in favor of $121 put forth by the government and $110 proposed by the industry.

The unions’ wage proposal received only seven votes after two of the unions abstained from voting, the Daily reported, while the factory and government proposals received nine votes each.

In November, the tripartite Labour Advisory Committee will vote on which of the two wages it thinks should be the new minimum. But unionists and labor rights activists decried the decision Friday, saying that it could spell more trouble for an industry that has already seen its fair share of unrest over the past 12 months.

Dave Welsh, country director of the Solidarity Center, a United States-based labor rights organization, told the AA that the process of trying to establish a living minimum wage in Cambodia had been “polluted,” and that a significant amount of "international pushback" is on the cards -- although he was uncertain as to what the reaction will be.

"This is happening as a result of promises made by the government last January. It should be a transparent process now virtually every brand invested in Cambodia has called on the government to be proactive and [the brands] have committed to adjusting their costs" in order to see an increased minimum wage, he added.

Labor ministry spokesman Heng Suor could not be reached for comment.

The Cambodian garment industry produces clothes for brands such as Gap, H&M and Zara and exported $5.5 billion worth of garments last year, which accounts for 80 percent of its exports, The Cambodia Daily reported October 24.

It added that $4.44-billion worth of garments were exported in the first nine months of 2014.