Airlines cut another 1,300 flights on Monday and planned only about a dozen for Tuesday. 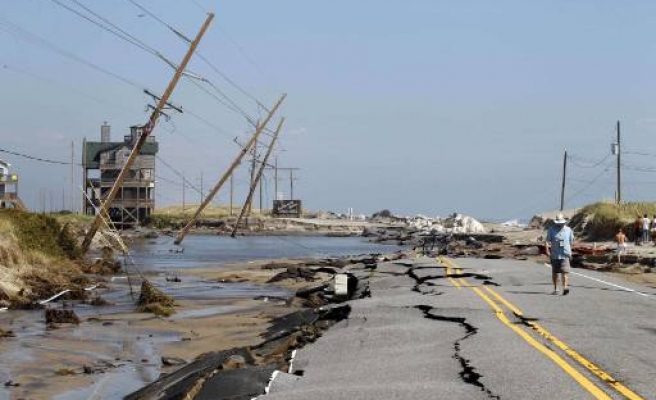 U.S. airlines scrambled to put their operations back together in the U.S. Northeast on Monday following Hurricane Irene and braced for a financial hit from extensive storm-related cancellations.

By scratching more than 12,000 flights from Friday to Sunday, carriers hoped to optimize their ability to restart schedules after the storm and avoid disruptions heading into Labor Day, the last big weekend of peak summer travel.

Nonetheless, Vaughn Cordle, an analyst and consultant with AirlineForecasts.com, estimated Irene could shave $200 million to $300 million off annual profits of the top 10 U.S. airlines.

The disruption could hit JetBlue Airways Group the hardest as it is based in New York, he said, cutting earnings this year by an estimated 15 percent to 20 percent. Other carriers with bigger networks could take a 3 percent to 5 percent profit hit, he added.

Airlines cut another 1,300 flights on Monday and planned only about a dozen for Tuesday.

Influencing that strategy is a new U.S. government policy that fines airlines for keeping aircraft idling on taxiways and runways for more than three hours.

Tom Hendricks, senior vice president of safety, security and operations at the Air Transport Association trade group, told Reuters Insider it could take up to three days to sort out the weekend's passenger backlog.

"Airlines are working very aggressively to reaccommodate passengers and get their networks back up to speed. Airlines want those airplanes in the air flying," said Hendricks, a former Delta Air Lines Inc executive.

Clear weather on Sunday night and Monday helped expedite operations with airports nationwide reporting no significant delays, according to the Federal Aviation Administration.

Online airline tracking service Flightaware.com Chief Executive Daniel Baker said damage from Irene was not as bad as it could have been.

"With winter storms, you can get tremendous amounts of snow and ice on the ground" that requires days to recover from, Baker said.

US Airways Group Inc ran a close to normal schedule of 3,200 departures on Monday, canceling 270 flights. The carrier, with heavy operations in Washington and Philadelphia and shuttle service at New York's LaGuardia, expected regular operations for Labor Day weekend travel.

JetBlue planned to operate 430 of more than 700 scheduled flights. It rebooked affected customers and would operate 42 flights not previously scheduled to help clear its backlog of passengers.

The Northeast blizzard last December had cost JetBlue $30 million in lost revenue when it canceled 1,400 flights.

Delta, United Airlines and AMR Corp's American Airlines also worked to get their networks in shape.

"There will be an economic impact, but as the reaccommodation process isn't complete and all repairs to facilities have not been completed, it will be some time until we can assess the cost of the storm," said Ed Martelle, a spokesman for American.

Analysts also likened the hurricane's impact to a winter storm and said the financial impact depended on an airline's exposure to hard-hit cities. Overall the industry was not expected to suffer too badly.

"This is going to be a minor blip in (airlines') revenue this year," said Robert Herbst, an independent airline analyst with AirlineFinancials.com.

Analysts said carriers would recoup revenue lost from Irene in future and replaced bookings. Airlines also have pricing power, so it was likely they could bring back more capacity.

Additionally, they realized a $400 million windfall earlier in the quarter from a two-week federal ticket tax holiday, which would help offset losses from Irene.

Helane Becker, an analyst with Dahlman Rose & Co, said in a client note she expected Labor Day travel "to be fairly strong with bookings up on a year over year basis."

Steve Wilder, an analyst with Capstone Investments, also did not believe Irene would have any impact on Labor Day travel.