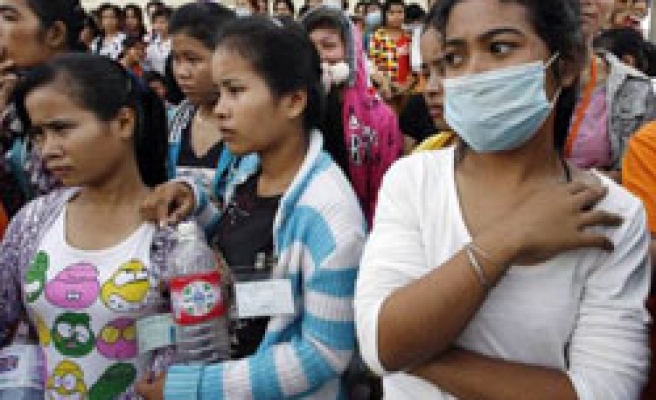 Cambodian labour activist Moeun Tola blames the Gap Inc, Nike Inc and other big Western brands for sinking Cambodian workers in low wages. Inspired by labour disputes in China, he is pushing back.

Moeun Tola and thousands of Cambodian garment workers began a five-day walkout on Monday to demand better wages and benefits, a sign recent labour unrest in China may be spreading to factories elsewhere in Asia that supply the world with low-cost goods.

A wave of worker disputes in China, mostly at foreign-owned factories, have raised questions over whether other low-cost Asian manufacturing centres will also see higher wages as their workers become more assertive.

In Bangladesh, thousands of textile workers demanding a rise in wages to $72 a month from $43 clashed with police last month and at least 500 people were injured. In Vietnam, thousands went on strike in April at a Taiwanese-owned shoe factory.

In Cambodia, activists such as Moeun Tola say Gap, Nike, Wal-Mart Stores Inc and other big brands are socially responsible so they should be putting more pressure on Cambodian factories that pay as little as $50 a month.

"Big companies like Nike, Adidas and the Wal-Mart have a code of conduct when putting in orders in Cambodia and can make sure no workers are violated or get poor pay and that they can have contracts that last longer than just a few months," he said.

The Coalition of Cambodian Apparel Workers Democratic Union, representing about 40,000 workers, expects about 80,000 people to go on strike seeking a $93 monthly wage -- a 50 percent increase from the $61 agreed in July under a four-year pact between the government and several unions.

That was up from a previous monthly wage of $56.

Chheng Chanvy, 25, has camped under a tent for days outside a factory in Phnom Penh to protest monthly wages as low as $50 paid by her Chinese-owned employer, San Lei Fung Garment & Woolen Knitting Factory Ltd.

She said workers were no longer paid on a monthly basis, but by the volume they produced.

"We don't get a salary. We are paid by the quantity of work, so we earn around $50 to $90 a month," Chheng Chanvy said. "This is not enough. My family spends almost all of that on water and electricity bills," she said.

Her factory, San Lei Fung, has been singled out by U.S. human rights advocacy group the National Labor Committee as a "sweatshop" that supplies U.S. brands.

San Lei Fung officials were not available for comment.

Although labour costs in Cambodia, Vietnam, Bangladesh and Laos are considerably below those in China, the ripple-effect of higher factory wages could pressure these countries to strengthen infrastructure to stay competitive as alternatives to China.

Textiles are Cambodia's third-biggest foreign currency earner, employing an estimated 300,000 of Cambodia's 13.4 million people and sending cash back to impoverished villages where many people live on less than $1 a day.

But some labour activists say the industry is bouncing back. Cambodian garment exports rose 12 percent in the first half of 2010 from a year earlier, hitting $1.25 billion, according to the Economic Institute of Cambodia, an independent think-tank.

Cambodian workers need at least $71.99 per month to survive, the Cambodia Institute of Development Study said. About $57 goes to basic needs and another $15 for their dependents, it said.

But Ken Loo of the Garment Manufacturers Association of Cambodia said wages were "fair" and most workers "content".

"This is not a complaint by the majority of workers, therefore, it is not a valid complaint," he argued.