France and Germany unveiled far-reaching plans for closer euro zone integration on Tuesday but stopped short of increasing the size of the region's rescue fund. 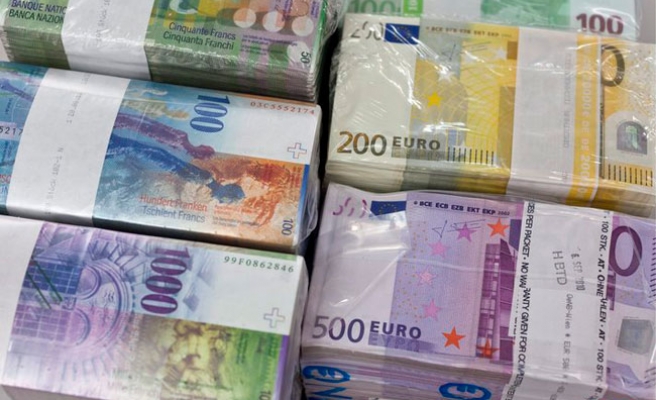 World stocks ticked lower while top-rated government bonds rallied on Wednesday as investors grew concerned that French and German plans for closer fiscal integration may be insufficient to stop the regional debt crisis from spreading further.

The Swiss franc surged against the euro after fresh measures announced by the Swiss National Bank to counter the franc strength did not contain drastic moves such as an exchange rate target which some had expected.

France and Germany unveiled far-reaching plans for closer euro zone integration on Tuesday but stopped short of increasing the size of the region's rescue fund and rejected for now the idea of a common euro bond.

Support for a common bond had been growing as it is increasingly seen as a way to allow highly indebted euro zone countries to regain access to commercial markets while providing investors a safeguard through joint liability.

"There weren't any scoops as the proposals had been mentioned over the past few days. Overall, the outcome of the meeting wasn't convincing, with no euro bond project," said Patrice Perois, trader at Kepler Capital Markets, in Paris.

MSCI's world equity index fell 0.1 percent, having hit a 1-1/2 week high on Tuesday. The index hit an 11-month low earlier in August during a volatile week which saw a rush to safe-haven assets.

European stocks fell half a percent while emerging stocks were steady.

Investors were particularly unimpressed by a plan to tax financial transactions.

"A European Tobin-like tax is not the solution. Again, European leaders fail to provide a proper answer to the right question," Natixis said in a note to clients.

"The efficiency of such a tax is clearly not proved.

U.S. stock futures were down 0.1 percent, pointing to a weaker open on Wall Street after Dell cut its 2012 revenue forecast on Tuesday, citing concerns about weakening economic growth and government and corporate spending.

The euro erased early losses to gain a quarter percent to $1.4437. The dollar fell 0.3 percent against a basket of major currencies.

"This is a disappointment as the market was expecting far more radical measures from the SNB like targeting a specific exchange rate," said Lena Komileva, senior vice president of foreign exchange at Brown Brothers Harriman.

"This is more of the same, and is inadequate in an environment where investors are seeking safe haven. This will invite more speculative flows into the Swiss franc."