The list of places where distrust among the general population is now dominant includes the United States, Japan, Germany, France, Britain, Italy, Russia and Turkey. 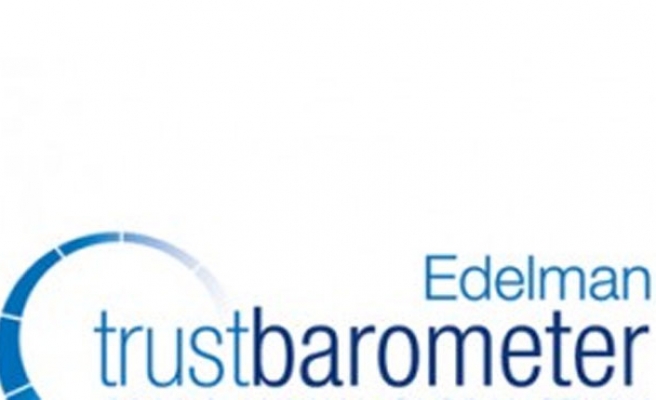 A year of disasters and mismanagement that included mystery air crashes, data hacks, foreign exchange rate rigging and the worst ever Ebola outbreak has torpedoed global trust in public bodies and business, according to a survey on Tuesday.

The annual Edelman Trust Barometer, released in Davos, showed a sharp decline in trust across the board with faith in governments, business, media and non-governmental organisations (NGOs) below 50 percent in two-thirds of countries.

The list of places where distrust among the general population is now dominant includes the United States, Japan, Germany, France, Britain, Italy, Russia and Turkey.

The picture is particularly stark for the 1,500 business leaders convening for the Jan. 21-24 World Economic Forum's talkfest in the Swiss Alps.

Not only has overall trust in business fallen, after clawing back some ground following the 2008 financial crash, but belief in chief executives as credible spokespeople has slumped for the third consecutive year.

Richard Edelman, head of the U.S. public relations firm Edelman, which commissioned the study, said the decrease in trust was startling and was driven by the "unpredictable and unimaginable" events of 2014.

"In reacting to these events, the world's major institutions have looked out of synch," he said. "It's not really related to economic performance because there's nothing catastrophic on the economic front like there was in 2008-09."

The survey painted a mixed picture for technology, which is playing an increasingly central role in people's lives.

A majority of respondents believe technological innovation is happening too quickly, driven by greed among business rather than a desire to make the world a better place.

But, in a worrying signal for "old media", online search engines are now more trusted as a source for general news and information than traditional media.

Across all major industries, consumers want stronger regulation of businesses but have little confidence that policymakers will develop and implement appropriate rules.