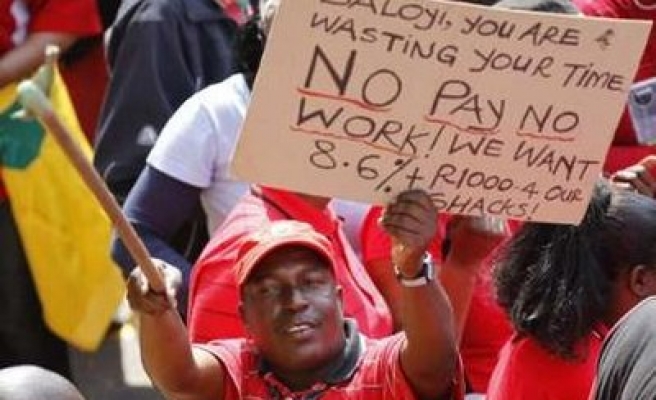 South African President Jacob Zuma has told government ministers to negotiate immediately to end a public sector pay strike and expects both them and unions to give ground, his spokesman said on Monday.

So far, the government has said it cannot afford the demand for increases more than double inflation to end the strike by some 1.3 million workers, which has entered its third week and threatens to spread across Africa's biggest economy.

Zuma has been under growing political pressure to end the strike by workers including teachers, nurses and clerks that has shut schools, led to bodies piling up at state morgues and slowed the delivery of welfare services for the poor.

His spokesman said the president was particularly concerned about the impact on health and education.

"The president's view is that the strike must end as soon as possible, in the next couple of days," Zizi Kodwa said, adding that Zuma had spoken to government ministers at the weekend to tell them to resume talks.

"He appealed to both sides to put the interests of the country first. That would mean give and take from both sides in negotiations," Kodwa said. He did not say what concessions Zuma expected the government to make.

South Africa's biggest strike since 2007 in terms of lost man days has left bonds, stocks and the rand largely unaffected, but market players said the strike would cap gains by the rand and could have a bigger impact if it drags on.

"The federation hopes that an improved offer will now be tabled and that the strike can be settled as quickly as possible, through an agreement that is acceptable to the workers," it said in a statement.

The strike has deepened a rift within the ruling alliance between Zuma's African National Congress and COSATU, which helped bring him to power but is disappointed he did not shift policies to the left.

COSATU has threatened to widen the strike later this week to all its member unions who it says represent about 2 million workers.

Analysts expect Zuma and the ANC government, which has typically given in to labour's demands, to reach a deal soon, tilted in favour of the unions, and worry later about the damage to state spending.

"Politically, this is beneficial for Zuma because he is in a tight spot with the unions at the moment," said Susan Booysen, a political analyst at Wits University.

"The country already has a high deficit. The rise may result in higher taxes as the government tries to balance its books."

Spending on personnel is the biggest category of state expenditure, taking up about a third of the budget. In 2006/07, about 35 percent of tax revenue went to paying state employees and that rose to about 47 percent in 2009/10.

Unions have increasingly linked the labour action to Zuma's political future as he heads into a major ANC policy-setting meeting in September and the party battles in local elections in the first half of next year.

COSATU Secretary-General Zwelinzima Vavi threatened to withdraw support for the ANC at the weekend, but the union federation struck a more conciliatory tone on Monday, condemning personal attacks on Zuma.