Thousands of pro-British Protestants march every summer in the British province, a regular flashpoint for sectarian violence as Catholics, many of whom favour unification with Ireland, see the parades as a provocation. 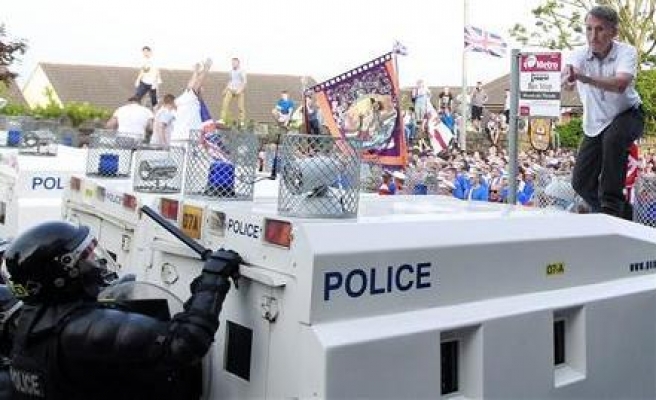 Thousands of pro-British Protestants march every summer in the British province, a regular flashpoint for sectarian violence as Catholics, many of whom favour unification with Ireland, see the parades as a provocation.

Violence between the two religious groups still sometimes flares since a peace deal was signed in 1998, which largely ended three decades of trouble. Much of Belfast remains divided along religious and nationalist lines.

A total 32 police were injured, including head, eye and leg wounds. Another 400 reinforcements were being brought in from Britain.

Tens of thousands of Orange Order marchers, wearing orange sashes and waving British flags, paraded at more than a dozen venues across Northern Ireland on Friday to mark the 1690 victory at the Battle of the Boyne by Protestant Prince William of Orange over Catholic King James of England.

The Orange Order was angered this year when authorities ruled they could not walk along a stretch of road that divides the two communities, a flashpoint for trouble in the past.

"I think that this morning some of the leadership of the Orange Order need to reflect upon whether they provided the responsible leadership asked for by myself and the party leaders," Baggott told a news conference.

Calm had returned on Saturday and the Orange Order said it was "suspending protest action" over the ruling, after it had previously said it would continue over the weekend.

Overnight, rioters had thrown petrol bombs, bricks, bottles and fireworks at police, who responded with plastic bullets and water cannon.

Nigel Dodds, a lawmaker representing North Belfast in Britain's Parliament, was released from the hospital after he was hit on the head by a missile, said his party colleague Nelson McCausland