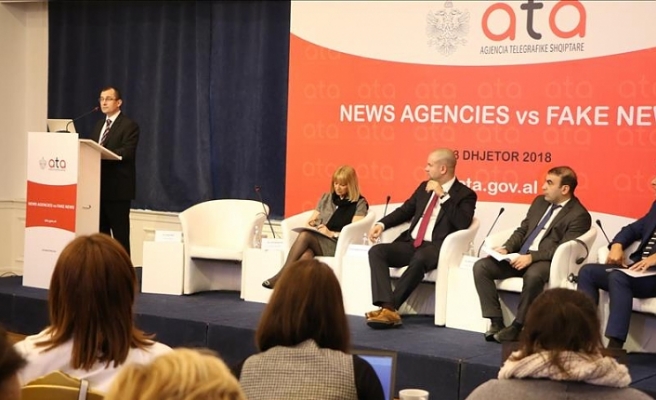 13 European news agencies on Tuesday agreed to cooperate against fake news in an international conference held in the Albanian capital Tirana.

Hosted by the Albanian Telegraphic Agency (ATA) on Dec. 3-4, heads of news agencies highlighted the necessity of coping with the global phenomenon of fake news in the conference titled News Agencies vs. Fake News.

According to ATA, they pointed out that new technologies enable the rapid spread of fake, confusing news that infringe basic human freedom, such as the right to information.

The heads of the participating agencies put emphasis on the great role that news agencies should take in coping with fake news.

Concluding the event, the participating agencies agreed to sign the "Tirana Declaration".

Anadolu Agency is among the 12 other agencies that signed the declaration.

The joint declaration emphasizes that the agencies have similar views on how they should act in unity, while having regard to the diversity.

Agencies have also agreed to the following principles:

- Promote trustworthy media and education of users in navigating the digital environment.

- Protection of the diversity and sustainability of the real news media ecosystem.

The declaration also urges all news agencies, no matter if they are state or privately funded, as well international associations of news agencies, to join in adhering to the resolution.

The initiators are: ATA from Albania, ANA MPA from Greece, HINA from Croatia, BTA from Bulgaria, AZERTAC from Azerbaijan, PAP from Poland, AGERPRES from Romania, TASR from Slovakia, UKRINFORM from Ukraine, CNA from the Greek Cypriot administration, FENA from Bosnia and Herzegovina, TANJUG from Serbia and Anadolu Agency from Turkey.