Across Germany, right-wing organizations are using anti-Islam rhetoric to further their ideas -- and finding a receptive audience 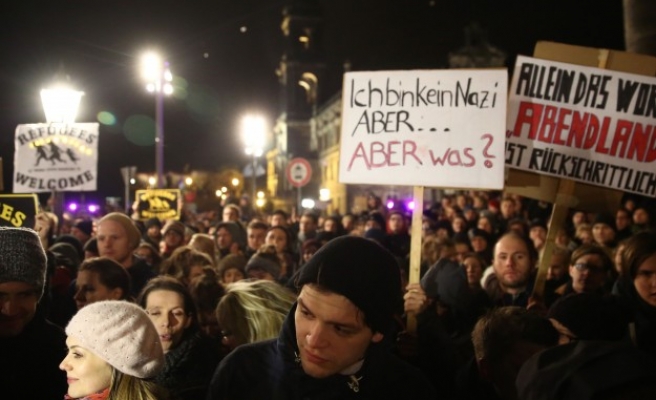 A new right-wing movement that assails the German government for ignoring its fears of being overrun by Muslims and other immigrants attracted a record 15,000 marchers on Monday in the eastern city of Dresden.

The fast-growing movement that calls itself PEGIDA, or Patriotic Europeans Against the Islamisation of the West, has drawn support from the far-right as well as some ordinary Germans using racist and Islamphobic rhetoric against refugees, many fleeing conflict in the Middle East.

The rallies have spread rapidly across Germany since starting with a local social media appeal in Dresden two months ago. They are now beginning to unsettle the German political establishment, which has spent decades restoring Germany's image as an open, tolerant country after the devastation of the Nazis.

"The politicians in Germany have lost touch with the people and that's why they can't comprehend what's happening here," Lutz Bachmann, the 41-year-old gravel-voiced leader of the movement, told marchers from a makeshift stage.

In recent weeks, media reports have exposed Bachmann's own criminal record for among other things burglary, drunk driving and drug dealing.

At the rally on Monday he lashed out at the media for what he said were lies about the movement, eliciting chants of "Luegenpresse! Luegenpresse!" (media lies!) from a fired-up group of demonstrators, mostly white men over 40 wearing shabby clothing.

Bachmann started PEGIDA in October to protest plans to add 14 centres for roughly 2,000 refugees in Dresden.

The number of asylum-seekers in Germany has surged to some 200,000 this year, more than any other western country, due in part to an influx of Syrians.

Even though foreigners are scarce in Dresden and the Saxony region compared to other parts of Germany, Bachmann's protest reverberated and his Monday rallies have grown from a few hundred to 10,000 a week ago and now to 15,000.

Marchers on Monday carried banners reading "Courage for the truth", "Stop immigrants abusing our social welfare system" and "We miss our country".

They chanted: "If you don't love Germany, leave it" and "We're the people" - the slogan used by pro-democracy demonstrators whose marches in eastern cities like Dresden led to the fall of the Berlin Wall 25 years ago.

Roughly 6,000 protesters marched in a separate anti-PEGIDA rally in Dresden on Monday evening.

Germany's Justice Minister Heiko Maas, a leading figure in the centre-left Social Democrats, has called the movement a disgrace for the country.

Chancellor Angela Merkel has condemned all forms of xenophobia and stressed that Germany needs immigrants to help it cope with a looming demographic crisis resulting from one of the lowest birth rates in Europe.

But she is also keen to avoid alienating voters that might ordinarily support her conservatives. Some are already leaving for a new party, the Alternative for Germany (AfD), which was founded last year in opposition to the euro currency but now talks tough on immigration and law-and-order issues.

"Anyone who goes to such a rally needs to watch out that they are not instrumentalised by the organisers," Merkel said in Berlin on Monday, adding that her government was working with states and cities to ensure any problems arising from the influx of asylum seekers were resolved.

Political scientists say that the ferocity of the PEGIDA movement has caught the country's political leaders off guard.

"It's extremely dangerous for Germany and its reputation as a country that is open to the world," said Thomas Jaeger, a political scientist at Cologne University.

"It's also extremely dangerous for Merkel because a political movement is now opening up to the right of her conservative party and that had never happened before," he said.

Lutz Hagen, a professor at Dresden's Technical University, said it was wrong to write off all PEGIDA supporters as far-right nuts. "It's already a broad movement and could become even broader," he said.

Dresden is a conservative bastion and the venue for Germany's biggest annual neo-Nazi march, which takes place on the anniversary of the controversial bombing of the city by Allied forces near the end of World War Two.

Thomas Tretz, a 46-year-old chauffeur, who was proudly waving a large German flag in front of the stage before Bachmann's speech, bristled at the suggestion PEGIDA was anti-foreign.

"We're not Nazis," Tretz snapped. "We're just peaceful citizens against the Islamisation of Germany. We're not against foreigners who come here to work. We've got nothing against the Turks or anyone else."

However the rallies are also drawing far-right supporters and sympathisers. A 35-year-old woman who identified herself only as Heidrun was passing out free copies of the far-right weekly "Junge Freiheit".

"We're being inundated by asylum-seekers and 70 percent of them have no right to be here," he said. "We want to talk about that. And we've got a problem with Islam overrunning us in Germany and Europe. It's just stupid to say that's not happening because it is."

There have been plenty of similar movements in Germany in recent years, Der Spiegel reports. They generally begin in response to the construction of a mosque: Reluctance turns into resistance, then hate and violence. Over the last two years, there have been arson attacks against Muslim prayer houses in Berlin, Hanau and Hannover.

According to a study by the Friedrich Ebert Foundation, 56 percent of Germans consider Islam to be an "archaic religion, incapable of fitting into modern life" and many believe religious freedom for Muslims should be "substantially restricted."

Anti-Islamists generally don't differentiate between Sunnis, Shiites and Alevi, or between "militants  and peaceful believers." In their imagination, Islam isn't a religion but a political ideology that must be fought. Muslims are accused of trying to take over the world, undermining the sovereignty of democratic states, infiltrating their legal systems.

The website of the "Nürnberg 2.0" project shows wanted posters of supposed Muslim supporters -- judges, journalists, politicians -- who are to be brought to justice for the "Islamification of Germany" in the vein of "the Nuremberg War Crimes Trials of 1945."

Maren Brandenburger, the head of the Lower-Saxony intelligence service, confirms that neo-Nazis are increasingly stirring up hatred against Muslims, a phenomenon she sees as a "strategic reorientation of organized right-wing extremism." Anti-Islamic sentiment now comes in the guise of the average German man or woman.