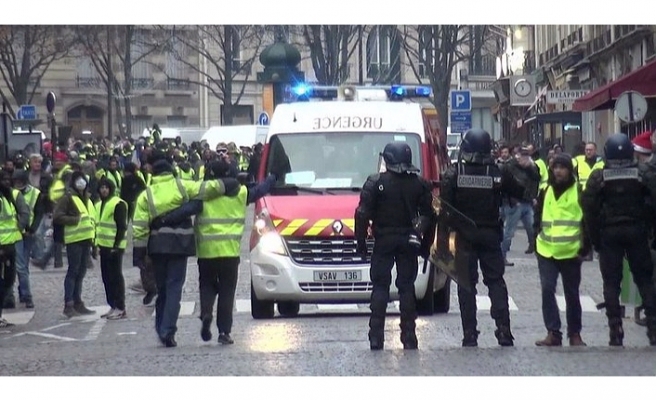 At least 30 people, including three police officers, were injured in Paris protests by the yellow vests that turned into riots on Saturday, according to French media reports.

French police used pepper spray and water cannons to disperse the crowd along the Champs-Elysees and adjacent streets.

Separately 1,000 protesters were taken to police stations across France, and 720 of them were arrested, said local reports.

Similar protests were also seen to the northeast, in Belgium and the Netherlands.

In Brussels, tensions between the Belgian police and yellow vests mounted as security forces used water cannons and pepper spray on almost 1,000 protesters in Arts-Loi.

The protesters damaged traffic signs and threw objects such as plastic bottles at the police.

Brussels police previously announced that some 100 people had been arrested.

In Netherlands, the yellow vests took to the streets in many cities, including the capital Amsterdam.

The yellow vests in Netherlands protested government policies on the retirement age, the price of health care, education, and migrant problems. In Amsterdam three people were arrested for insulting police and possessing knives and sparklers.

"The Paris Agreement isn’t working out so well for Paris. Protests and riots all over France. People do not want to pay large sums of money, much to third world countries (that are questionably run), in order to maybe protect the environment. Chanting 'We Want Trump!' Love France," he wrote.

Last year, Trump announced the U.S. was pulling out of the Paris Climate Accord, an international agreement to reduce the greenhouse gas emissions that cause climate change.

This October, without supplying any evidence, he accused climate change scientists of having a “political agenda,” saying that while he thinks the climate is changing, he does not believe it is manmade.