The Catholic parade, marking the anniversary of the 1971 introduction of internment without trial by British authorities, eventually had to pass along a different route after Protestants tried to block a march on Friday evening. 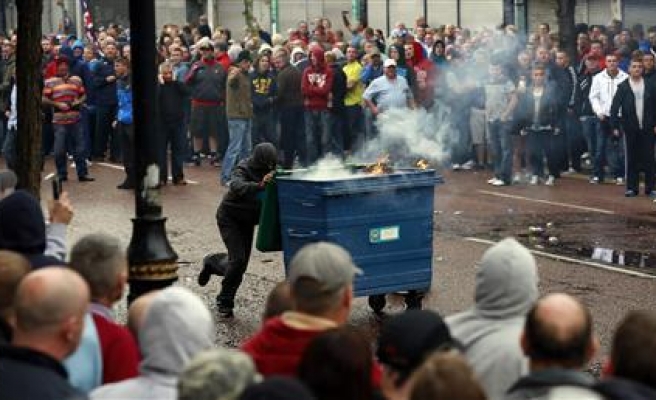 Fifty-six police officers and two civilians were injured in clashes in central Belfast in the latest flare-up in tensions between Northern Ireland's Protestant and Catholic communities, authorities said on Saturday.

Many of the injuries were minor, but four officers were taken to hospital after the clashes late on Friday, during which police fired plastic bullets and water cannon after being pelted with missiles for a second successive night.

Belfast remains divided between pro-British Protestants and Catholics who generally favour unification with Ireland, despite a 1998 peace and power-sharing deal that put an end to the worst of the "troubles" in the British province.

Protestants tried to block a march on Friday evening along the city's main thoroughfare, Royal Avenue, by the nationalist side of the community and when police moved in to clear them, they threw bricks, bottles and fireworks.

"There were all sorts of weapons and equipment being used against the police including scaffolding and masonry. People were pulling up the paving stones from the busiest shopping precinct in Belfast."

The Catholic parade, marking the anniversary of the 1971 introduction of internment without trial by British authorities, eventually had to pass along a different route.

Eight were hurt on Thursday night when a crowd at a bonfire to mark the anniversary in a Catholic-dominated part of Belfast threw paint bombs, bottles and masonry at police.

In all, more than 3,600 people died in a sectarian conflict that began in the late 1960s, including more than 1,000 members of the British security forces. More than 36,000 were injured.