82 bodies had been recovered by emergency workers, including those of two children and several women. 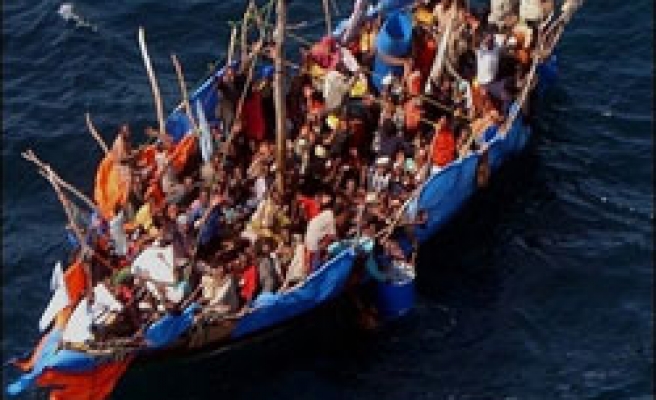 At least 82 asylum-seekers drowned and 150 were rescued after a boat carrying some 500 people caught fire and capsized near an Italian island on Thursday, officials and media reports said.

The Italian news agency Ansa quoted the local mayor of Lampedusa, Giusi Nicolini, as saying 82 bodies had been recovered by emergency workers, including those of two children and several women.

"The survivors are in a state of shock. They have been in the water since the early hours of the morning," Nicolini told news channel SkyTG24, as emergency workers raced to rescue more survivors.

Shaken survivors wrapped in thermal blankets -- many of them bare-chested -- were seen arriving on the dock in images shown on television, as an emergency worker broke down in tears.

Officials said the bodies were being taken to an airport hangar because of the large numbers.

"We cannot keep on counting the dead. We have to mobilise, do something concrete to avoid these constant tragedies of despair," the local archbishop, Francesco Montenegro, said.

The asylum-seekers said they were from Eritrea and Somalia and local police were quoted as saying they believed the boat had left from Libyan shores.

Prosecutors have opened an inquiry for multiple murder, as well as favouring illegal immigration.

Nicolini said the migrants had told her they lit a small fire on their boat around half a mile from the shore to attract the attention of coast guards after their vessel suffered engine failure.

The fire then spread, sowing panic on board which caused the boat to flip over, she said.

Lampedusa is an Italian island lying between Tunisia and Sicily and is a major entryway for asylum-seekers into the European Union, with thousands arriving every year.

"The first assistance was provided by people on pleasure boats who heard the screams," Antonino Candela, a local emergency medical worker said.

Candela said the incident happened shortly after another boat arrived safely in Lampedusa with 463 people on board, believed to be from Syria.

The accident was the latest in many drownings involving migrants travelling on rickety fishing boats or rubber dinghies in the Mediterranean, where thousands have died in recent years.

There has been an increase in the incidents off Italy in recent weeks amid an upsurge in arrivals -- mainly from Egypt, Eritrea, Somalia and Syria.

On Monday, 13 Eritrean asylum-seekers drowned as they tried to swim ashore when their boat ran aground off Sicily near the city of Ragusa.

In a similar incident near Catania in another part of Sicily in August, six young Egyptian men drowned trying to reach the shore.

Pope Francis visited Lampedusa in July on his first trip outside Rome as pontiff and called for an end to "indifference" to the plight of refugees.

He said at a mass during his visit: "The culture of well-being makes us think about ourselves, renders us insensitive to the cries of others."