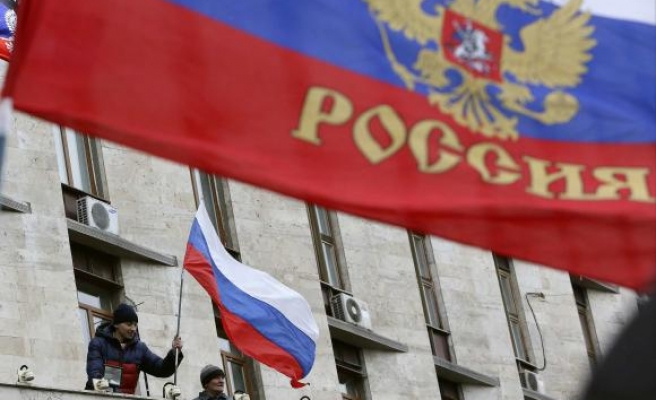 Pro-Moscow activists recaptured the administrative headquarters of the eastern city of Donetsk and flew the Russian flag from its roof on Wednesday, hours after Kiev's authorities managed to fly their own flag there for the first time since Saturday.

While the group of a few hundred pro-Moscow protesters was recapturing the building, however, a far larger demonstration gathered elsewhere in the city in favour of the authorities in Kiev, a sign of a backlash among some people towards Moscow's allies in Ukraine's Russian-speaking heartland.

Around 5,000 supporters of the new authorities in Kiev, who chanted "Down with Putin! Donetsk is Ukraine!", rallied on the city's central square, where they were charged by about 1,000 pro-Moscow protesters chanting "Russia! Russia!"

Police were unable to keep them apart. Local authorities said seven people were injured including one hospitalised. Among those hurt were supporters of Donetsk's main soccer team, Shakhtyor, who, in a sign of growing disillusionment in the city with the pro-Russian activists, had turned out to protect the demonstrators on the pro-Kiev side.

The arrival of large numbers of supporters of the government is a new development in the city, home town of ousted leader Viktor Yanukovich, where most people speak Russian and many are deeply suspicious of Kiev.

Pro-Moscow demonstrators had been holed up in the regional administration building since Monday. Ukrainian police persuaded them to leave on Wednesday after announcing a bomb threat in the building, and the Ukrainian flag was raised once they had left.

"We are determined to erect our people's power in the Donetsk region. And we will not retreat. We have huge support," their leader Pavel Gubarev said in front of the building before mounting an hours-long tussle to reclaim it from police.

Gubarev, a local businessman, calls himself the "people's governor" and has demanded that the regional security forces be placed under his control.

Donetsk has seen the most persistent pro-Russian demonstrations in a wave of protests that erupted across southern and eastern cities on Saturday just as President Vladimir Putin was declaring Russia's right to invade.

Kiev says the protests across the south and east were arranged by Moscow to justify an invasion. It says those in other cities have tried to follow the pattern of Crimea, the southern peninsula where Russian troops quickly seized control after a pro-Russian politician was declared the new leader behind closed doors in a besieged regional parliament last week.

OLIGARCH YET TO TAKE CHARGE

The future of eastern and southern cities has been in flux, with many of the locals deeply hostile to the new authorities in Kiev but others worried about the prospect of a Russian assault and concerned about militant tactics by Moscow's supporters.

Gubarev's followers are a mix of locals and some outsiders who speak Russian without the region's distinctive accent.

"What is going on in Donetsk is abnormal," said Anatoly Prokopenko, a pro-Kiev demonstrator. "I can't go with a flag of my own country into city centre: I need to be afraid. But people with the flags of another country act like they are the bosses and even put their flag on the administration building."

Kiev's new government has named one of Ukraine's richest men, metal baron Sergei Taruta, as Donetsk regional governor, a sign that powerful oligarchs, many of whom once supported Yanukovich, are now behind the new authorities.

But Taruta has yet to appear at the Donetsk government headquarters to take up the job in person. On Wednesday morning he was shown on television telling the Kiev cabinet by video link that the leadership of the police force needed changing because of "sabotage from the side of the security forces".

"Everything is fine. Everyone is in place," Taruta said.

Regional police chief Roman Romanov announced he was stepping down for health reasons.

Ukraine says it has not used force to safeguard the building in Donetsk to avoid violence that might provoke a Russian military response. Authorities have also acknowledged questions about the loyalty of some security forces.

About 1,000 pro-Moscow activists also marched on Wednesday in Kharkiv, another eastern city whose administrative headquarters were stormed five days ago when scores of people were injured by protesters with axe handles and chains.

This time, police kept the demonstrators safely away from the administration building, which was flying the Ukrainian flag. A delegation was allowed in to present demands to the newly appointed governor, Ihor Baluta.

Sitting around a table in the marble clad room, the men, all wearing orange and black ribbons of the pro-Russia movement, demanded he call a referendum on federalism for Ukraine and making Russian a state language. They said if their demands were not met they would send a petition to Putin for help.

At the demonstration outside, sales manager Dmitry Prohorov said people would continue to demonstrate as long as the needs of Russian speakers were ignored by the "illegitimate" government in Kiev. "Leaders we didn't choose have appointed a governor we don't even know ... The demonstrations will continue until we are given a voice."