Some 300 migrants held up traffic on a main route into the city, with riot police called in to push the men back into their near-by temporary camp, where they are awaiting registration and identity papers. 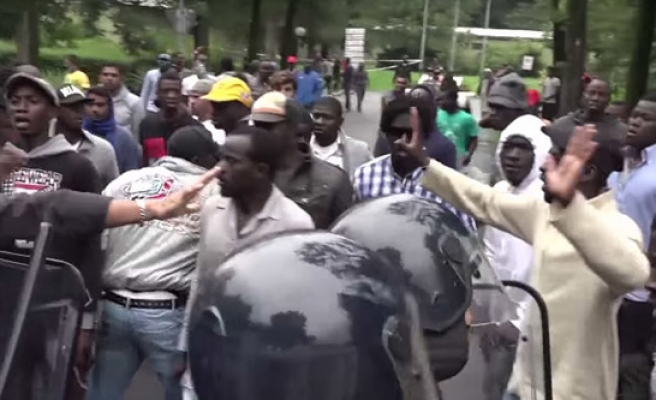 Hundreds of refugees clashed with police in the Italian city of Milan after blocking a major road in protest of poor living conditions at a Red Cross refugee center and their inability to get work permits.
About 300 protesters made their way along an avenue connecting Milan to Sesto San Giovanni and briefly blocked traffic, while holding up pieces of cardboard saying “We’re tired, we want our documents” and chanting “documents, documents.”
The refugees, mostly from Africa, have been forced to live in tents with up to eight people at a refugee center that remains flooded after last week’s heavy rain, the local newspaper Corriere della Sera reported.
Riot police arrived at the site to deal with the impromptu demonstration.

More than 1,500 refugees landed on Italian shores on Monday, as the influx of desperate people fleeing conflict and poverty continues.

Around 550 refugees were brought to shore in the Sicilian capital of Palermo, including children – among them dozens of unaccompanied minors. More than most, these youngsters face an uncertain future.

After difficult and dangerous journeys, more than 100,000 migrants have reached Italy so far this year by sea.

The rise in migrants in the Mediterranean is largely the result of political instability in Somalia and Eritrea and the breakdown of order in Libya, as well as Syria’s civil war.