'I needed a haircut ... And of course, it is obviously symbolic. Anything we do is symbolic,' the Chinese artist says 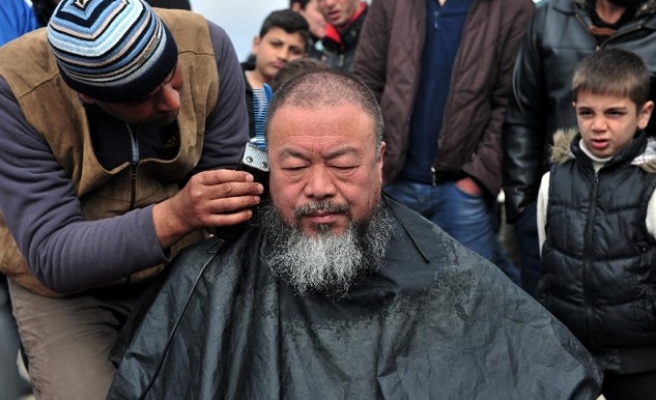 Chinese dissident artist Ai Weiwei on Thursday sat for a haircut and trim from a refugee barber at the Greek border camp of Idomeni to once again draw attention to the plight of thousands trapped there in squalor.

"I needed a haircut ... And of course, it is obviously symbolic. Anything we do is symbolic," Ai said afterwards.

"For me that means I have permanently (left) some of my hairs on this ground and they will never come back to me," he said.

Ai has taken a personal interest in the thousands of refugees who have risked their lives to get to Europe, only to find their path barred by a barrage of border closures.

On Saturday, the artist set up a white grand piano in the muddy, rain-drenched refugee camp on the Greek-Macedonian border, allowing a young Syrian woman to tinkle the ivories for the first time in years.

He and others held up a plastic sheet so 24-year-old Nour Alkhzam, who is hoping to reach her husband in Germany, could play for 20 minutes in a field where over 14,000 refugees and refugees are stuck in grim conditions after Macedonia and other Balkan nations shuttered their borders to stem the refugee flow.

Last month, he draped thousands of lifejackets discarded by refugees arriving in Greece around the columns of Berlin's Konzerthaus concert hall.

And in January, the artist closed down an exhibition of his work in Copenhagen in protest after lawmakers passed a controversial bill allowing authorities to seize valuables from asylum seekers.

China's most prominent contemporary artist, Ai helped design the Bird's Nest stadium for the Beijing Olympics and has been exhibited around the globe, but his works have often run afoul of China's authorities.

He was detained in 2011 for 81 days over his advocacy of democracy and human rights as well as other criticisms of the government in Beijing.