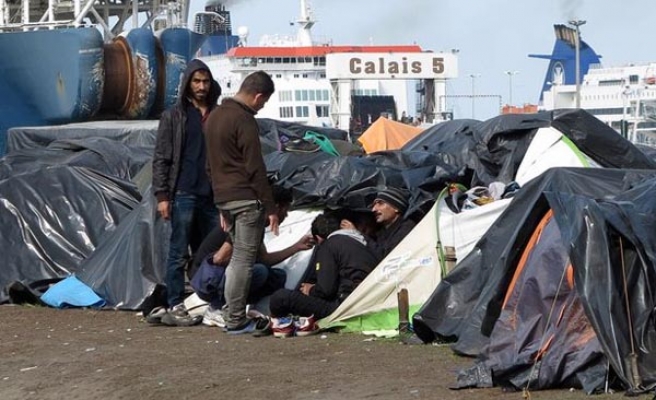 The French government’s plans to help thousands of refugees camped at “the Jungle” near Calais has come under fire from aid groups working at the site.

Earlier this week, Interior minister Bernard Cazeneuve promised to provide more humanitarian assistance for the estimated 6,000 refugees, including women and children, who face winter in makeshift shelters amid squalid conditions.

While Cazeneuve pledged heated tents and 460 more police officers to patrol the area, Medecins du Monde and Calais Solidarity labeled the proposals insufficient and akin to turning the camp into a prison in all but name.

“They don't have access to the basic vital needs such as food, water or stable housing,” Jean-Francois Corty, head of Medecins du Monde in France, told Anadolu Agency.

“What authorities are offering today is largely insufficient and is not up to what these people need to survive. We already condemned this several times since last year.”

He said families from conflict zones such as Syria, Iraq, Eritrea, Afghanistan and South Sudan were now living in “life-threatening” conditions in the camp 10 kilometers (6 miles) from Calais, the French port facing the English Channel.

The presence of large numbers of migrants in the area has persisted since 1999 when the Red Cross Sangatte reception center became rapidly overcrowded.

Attracted by the nearby Eurotunnel terminal and Calais port as a route for smuggling themselves to the U.K., the refugees have been a constant feature of the area despite French attempts to move them away.

Describing conditions within the site as “horrifying”, Corty said Medecins du Monde had installed facilities similar to those they place in warzones and disaster areas. “We have no governmental support whatsoever,” he said.

He added: “Now, as the winter is coming, the situation is worsening. With the cold, mud and humidity the refugees are more and more exposed to attract diseases. The sanitary situation is a disaster.”

According to Corty, many of the refugees suffer psychological problems that are compounded by conditions in the Jungle and feelings of degradation.

Mady Denantes, a doctor working for Medecins du Monde, said sanitary conditions at the Jungle were “worse than in a country at war.”

Speaking to L’Express news website, she added: “It's not dignified for France. Even in the poor countries or those at war, the camps are not in this state. It's appalling. At Calais, it's like the rules of public health don't apply.”

Among the government’s plans for the refugees is a proposal to build a camp for around 1,500 with EU assistance.

Construction is scheduled to begin next year and will be funded with a 5 million euro ($5.6 million) grant from the union. It will consist of 120 tents capable of housing 12 people each.

This funding is in addition to a 266 million euro ($299 million) EU package to help France address issues associated with its refugee population until 2020.

“When and how they will implement these measures?” Corty asked. “Will this camp be enough for all those people? And those who are taken to temporary centers, will they receive help to apply for asylum or be sent out in the streets?”

Calais Solidarity has similar concerns about the government’s ideas on dealing with the refugees at Calais.

“What about those who don’t fit in the camp? And who will the people who ‘fit’ be? Will they just allow the rest of the camp to live autonomously outside the walls of this prison? It seems unlikely. It seems like a more large scale eviction will happen in the next months.”

Calais Solidarity said the new camp “screams with disrespect” - constructed from shipping containers and built in the wettest and windiest part of the current site.

“People in the jungle don’t want the new closed camp,” the group added. “Many see it as what it really is - not a humanitarian gesture offering hygiene, safety and security but a further step in plans to divide and control people.”

Genevieve Jacques, president of Cimade, a French NGO that works with migrants, told France 24 that Britain had to share responsibility for the problem.

“The British chose not to be a part of the Schengen zone, which has created a bottleneck,” she said, referring to Europe’s passport-free zone.

“Right now, they’re letting France do all the dirty work. But France is also responsible. It alone is at fault for the migrants’ squalid living conditions. The country could do more to accommodate them decently.”