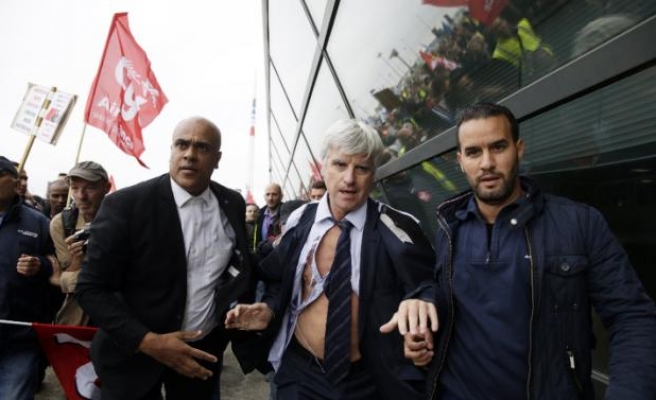 French President Francois Hollande said Tuesday scenes of Air France executives fleeing an angry mob after having their shirts ripped off by striking workers were "unacceptable" and put the image of the country at risk.

With the shirt stripped off his back, the struggling airline's human resources manager Xavier Broseta had to escape over a fence with the help of security guards on Monday after announcing plans to cut 2,900 jobs.

Another executive, Pierre Plissonnier, head of the airline's long-haul flight division, also had his shirt and jacket torn in the chaos.

Photographs of a bare-chested Broseta were splashed across the front pages and websites of newspapers across the world, including the Financial Times and New York Times.

Hollande said Tuesday: "Social dialogue matters, and when it's interrupted by violence and disputes take on an unacceptable form, it can have consequences for the image and attractiveness" of the country.

"It would be dramatic for our country if such a symbolic company is confronted with difficulties due to the refusal of a minority to adapt to a changing world," it said in a statement on Monday.

A grim-faced Prime Minister Manuel Valls returned from a visit to Japan and visited Air France's headquarters to express his concern at the attack.

"All of France is in shock," he said, accusing "thugs" of being behind the violence.

Seven people were hurt, including a security guard who was knocked unconscious and required hospital treatment.

Prosecutors said Tuesday they were opening a criminal investigation into the violence.

Air France, once a proud symbol of French elegance and technical know-how, is struggling to compete in the face of intense competition from global rivals, not least Germany's Lufthansa and the combined forces of British Airways and Iberia in Europe.

But talks broke down last week.

Instead, the company has proposed job cuts, believed to involve 300 pilots, 900 air hostesses and stewards, and 1,700 ground staff.

The company already shed 5,500 posts through voluntary departures between 2012 and 2014.

Its new cost-cutting plan also includes measures to reduce long-haul flights, sell 14 planes and possibly cancel some or all of the new Boeing 787s it has on order.

Air France staff are highly divided, according to unions.

Not all support the pilots, who went on a two-week strike a year ago over the expansion of Air France's low-cost subsidiary Transavia.

The record-long strike cost the company more than 400 million euros and prompted accusations from the government that they were effectively holding the airline to ransom.

Beatrice Lestic, of the CFDT union, told Le Parisien newspaper this week that ground staff, stewards and cabin crew "feel they have made enormous efforts without ending up in a position to influence decisions".

They felt helpless, she said, and were "now spectators to a crash in which they will be the first victims".