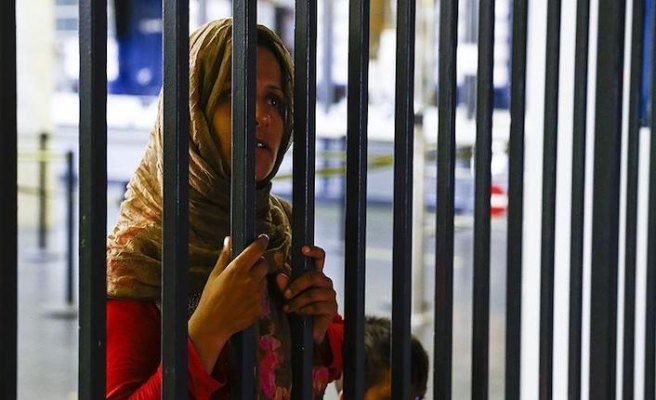 In the report published on Saturday, the human rights watchdog reveals that the women and girls who fled persecution and conflict after facing violence and sexual abuse in their countries gathered in hope for a better life in Europe.

The report titled "I Want to Decide About My Future: Uprooted women in Greece speak out" reveals the dire conditions and dangers that women and girls face as well as the perilous journeys they encounter when they reach the Greek islands or the mainland.

The report -- which includes interviews with more than 100 women and girls living in camps and apartments in and around Athens and on the Greek islands -- also drew attention to the remarkable determination of refugee women in overcoming challenges.

Based on the testimony of women and girls, the report announced 10 concrete demands aimed at overcoming human rights violations experienced by female refugees.

According to the report, the suffering of female refugees does not end when they arrive at the European coasts. More than 60 percent of those who arrive in Greece in 2018 are women and children.

Trapped in overcrowded and squalid EU-sponsored camps on the Greek islands, women and girls are exposed to several dangers, including harassment and sexual violence, the report added.

"The overcrowded camps has become a crisis. More than 15,500 people live in five-island camps designed for about 6,400 people. Thousands of people with special needs, including babies and disabled, are staying in tents around the main camp areas. The lack of a bathroom lock and poor lighting make daily activities such as going to the toilet, taking a shower or just walking at night, more dangerous for women and girls," according to the report.

"The fact that European governments have been avoiding to provide safe and legal means to refugees fleeing the war also increases the risk of women and girls' being subject to horrific infringements," Amnesty International Secretary-General Kumi Naidoo said.

The 10 demands of women and girls are:

2. Stop Confining People on the Islands

3. Protect Women at Risk of Violence