France defended its repatriation of Roma as criticism mounted from across the political spectrum and police demolished more camps. 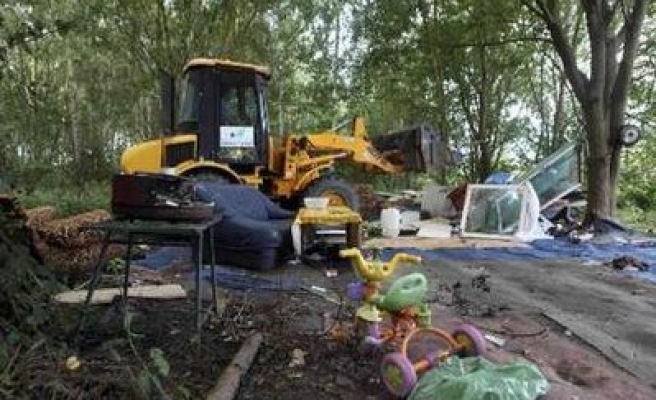 France defended its repatriation of Roma on Tuesday as criticism mounted from across the political spectrum and police demolished more camps.

President Nicolas Sarkozy's government began tearing down some 300 Roma camps last month in a crime crackdown targeting immigrants -- a move the opposition has branded a political gambit to shore up conservative support for 2012 elections.

More than 200 Roma have been sent back to Romania in recent days. But the crackdown, which prompted rights groups and opposition parties to call a national protest for next week, has also angered many on the French Right.

"This is a shameful policy. It's an electoral strategy. This will contribute nothing to the security of French people," said ex-prime minister Dominique de Villepin, a rival of Sarkozy's who recently split from the ruling UMP party.

"Its aim is to drive a wedge between the Right and Left and I protest because the French Right is not like this," he said.

Both the extreme right National Front and the opposition Socialist party have slammed the policy as a political gesture, and in recent days criticism has mounted from the Church.

Without referring directly to France, Pope Benedict on Sunday urged pilgrims in French to "accept human diversity". Clerics in France also voiced concerns, including a priest in the northern city of Lille who said he would return his Order of Merit medal and was praying for Sarkozy to have a heart attack.

Under an editorial entitled "Nicolas Sarkozy and Catholics: Divorce?" left-leaning daily Le Monde cited a poll showing the number of Catholics happy with Sarkozy had fallen to 47 percent from 61 percent a year ago.

With practising Catholics making up half the electorate, the presidential palace denied any rift.

"Catholics in France are perfectly aware that the government respects the laws of the Republic, European law, and human dignity, but our country cannot accept anything," Claude Gueant, Sarkozy's chief of staff, told Le Monde. "France is not obliged to welcome all the Roma."

France, which says it already expelled 10,000 Roma last year, insists it is acting in accordance with EU legislation by expelling Roma from Romania and Bulgaria who have been in France for more than three months without work.

Roma who agree to leave France are being offered 300 euros per adult and an additional 100 euros per child, but many say they are being coerced and will return immediately.

Police on Tuesday dismantled two more Roma camps. In the Lille suburbs, dozens of police detained some 20 Roma, half of them children, for illegally camping on municipal land.

The Roma were allowed to grab a few bags of belongings before a yellow bulldozer flattened their makeshift shacks, covered in plastic tarpaulins, crushing the childrens' toys.

In the southern city of Marseille, police evicted 40 Roma from an abandoned chemical warehouse and bulldozed the building.

Secretary of State for European Affairs Pierre Lellouche said it was a European problem rooted in their home countries' failure to provide for the Roma, despite billions in EU funds.

"We are counting on Romania and Bulgaria to act responsibly with regard to their own citizens," he told Le Figaro paper.