UKIP, Britain's anti-EU party, launched its campaign for next month's European elections on Tuesday, fending off accusations from rival lawmakers that its pre-election posters were racist. 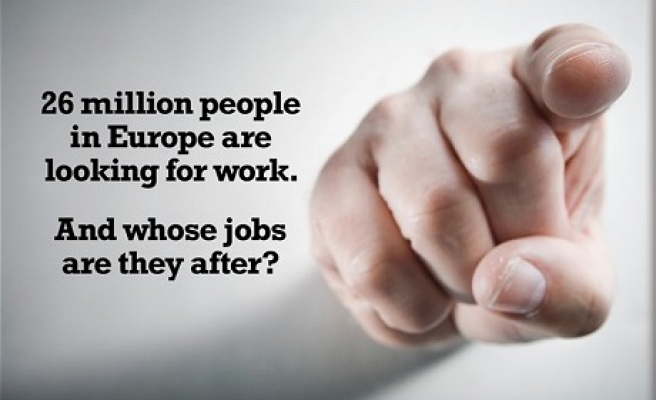 The leader of the United Kingdom Independence Party (UKIP) Nigel Farage has defended his party's anti-EU and anti-immigration leaflets after some accused them of having racist undertones in the run-up to te European Parliament elections.

With the help of a £1.5 million donations from businessman Paul Sykes, the party hopes to spend over double than that which they spent of previous EP election campaigns, aiming for a budget of £3million.

The leaflets focus on EU unemployment rates, cheap labor immigration, economic inequality and legal sovereignty. Mr Farage dismissed accusations that the leaflets were racist, instead decribing them as a “hard-hitting reflection of reality.”

Promising a “political earthquake,” Farage thanked Sykes for his contribution after the latter promised to do “whatever it takes to help Nigel Farage’s Ukip emerge the winner” in an article published in the Telegraph on Tuesday.

With polls showing the UK Independence Party will come second ahead of Prime Minister David Cameron's Conservatives in the May 22 election but behind the opposition Labour Party, UKIP hopes to attract enough extra votes to win the ballot outright.

Nigel Farage, the party's leader, has said such a victory would trigger a "political earthquake", putting UKIP in a position to win its first seats in the British parliament in 2015 and piling pressure on the three main parties to sever Britain's ties with the European Union.

UKIP wants Britain to leave the EU and an end to "open door" immigration, particularly from inside the 28-nation bloc. Polls show immigration to be one of voters' top three concerns and Cameron is under pressure to make good on his promise to cut net migration to the "tens of thousands" by 2015.

The prime minister has also promised Britons a referendum on leaving the bloc if re-elected next year. Labour and the Liberal Democrats oppose such a vote.

Launching its campaign in the northern English city of Sheffield, UKIP released a series of posters urging voters to "take back control of our country" by electing UKIP candidates. The party currently holds nine seats in the European Parliament.

One poster featured a picture of a finger pointing to anyone reading it, saying "26 million people in Europe are looking for work. And whose jobs are they after?"

Another showed a picture of a man dressed as a construction worker begging on the street, saying: "EU policy at work. British workers are hit hard by unlimited cheap labour".

Mike Gapes, a Labour lawmaker, said the posters were "racist", while Nicholas Soames, a Conservative lawmaker and the grandson of Winston Churchill, condemned them as "deeply divisive, offensive and ignorant."

"This UKIP campaign is a racist, xenophobic campaign designed to win votes by whipping up animosity against foreigners living and working and contributing to this country," Gapes wrote on his web site.

Without singling out any parties by name, Britain's most senior Catholic cleric on Tuesday called for the debate on immigration to be conducted calmly.

"What I would appeal (for) today is that the debate about immigration is done with a sense of realism and a sense of respect," Cardinal Vincent Nichols told The Daily Telegraph.

"And that it is not cushioned in expressions which are alarmist and evocative of anger or of dismay or distress at all these people coming to this country."