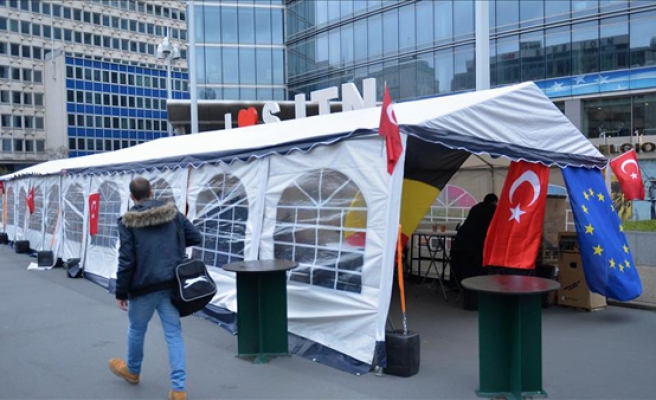 Turkish people in Belgium have set up a tent in the center of Brussels to commemorate terror victims and condemn attacks around the world.

The anti-terror tent pitched in Brussels’ Madou Square on Thursday has gathered hundreds of Belgian and Turkish people since Thursday.

Those present left flowers for terror victims killed in various countries around the world, particularly in Turkey and Belgium.

"There is no room for the PKK, ISIL and other terrorist organizations in our municipality," Emir Kir, a member of the Belgian parliament, told Anadolu Agency.

"As European Turks, we have pitched our tents at Madou Square, the center of Europe. We share the sorrow for the terror victims who lost their lives in Turkey and other countries," Basir Hamarat, head of the Belgian branch of the Union of European Turkish Democrats, told Anadolu Agency.

Stressing that they condemned terror and were against the PKK, PYD, ISIL and all other terrorist groups, Hamarat said:

"We strongly condemn the ones who allowed members of a … group listed as ‘terrorist’ by the European Union to set up a tent in Brussels for their propagandist aims. This has nothing to do with freedom of opinion and expression."

The move came as a response to the Belgian government’s decision to allow PKK supporters to set up a controversial tent and protest site near the European Council building in Brussels.

The PKK, listed as a terrorist organization by the U.S. and the EU, resumed its 30-year armed campaign against Turkey in late July. Since then, more than 350 members of security forces have been killed.