Two different groups of around 60 armed men raided and occupied the regional government and parliament buildings in Simferopol, the capital of Ukraine's Autonomous Republic of Crimea. 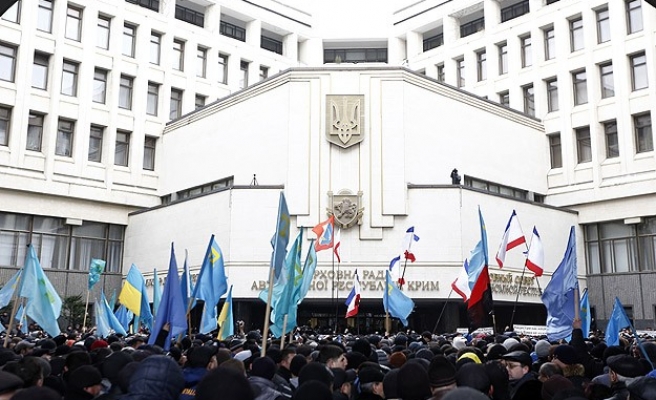 Armed men seized the parliament in Ukraine's Crimea region on Thursday and raised the Russian flag, alarming Kiev's new rulers, who urged Moscow not to abuse its navy base rights on the peninsula by moving troops around.

Crimea, the only Ukrainian region with an ethnic Russian majority, is the last big bastion of opposition to the new leadership in Kiev since President Viktor Yanukovich was ousted at the weekend and provides a base for Russia's Black Sea fleet.

"I am appealing to the military leadership of the Russian Black Sea fleet," said Olexander Turchinov, Ukraine's acting president.

"Any military movements, the more so if they are with weapons, beyond the boundaries of this territory (the base) will be seen by us as military aggression," he said, a day after 150,000 Russian troops near Ukraine were put on high alert.

The Ukraine Foreign Ministry also summoned Russia's acting ambassador in Kiev for immediate consultations as the face-off between Moscow and the West over Ukraine revived memories of the Cold War.

The United States called on Moscow to avoid doing anything risky over Ukraine, which has been in crisis since November, when Yanukovich abandoned a proposed trade pact with the EU and turned instead towards Russia.

The fresh turmoil in Crimea sent the Ukrainian hryvnia tumbling to a new record low of 11 to the dollar on the Reuters dealing platform.

The International Monetary Fund said it would send a team to Kiev in the coming days.

Ukraine's new finance minister, Oleksander Shlapak, said he hoped the IMF would work on an aid package of at least $15 billion. Ukraine says it needs $35 billion over the next two years to avoid bankruptcy.

The minister also said he expected the hryvnia to strengthen soon at around 10 to the dollar.

Ukraine's new rulers pressed ahead with efforts to restore stability to the divided country, approving formation of a national coalition government with former economy minister Arseny Yatseniuk as its proposed head.

Yatseniuk told parliament that Yanukovich had driven the country to the brink of collapse. He accused the deposed president of stripping state coffers bare and said $70 billion had disappeared into offshore accounts.

"The state treasury has been robbed and is empty," he said.

Yanukovich said on Thursday he was still president of Ukraine and warned its "illegitimate" rulers that people in the southeastern and southern regions would never accept mob rule.

In a statement sent to Russian news agencies from an unknown location, Yanukovich railed against the "extremists" who had stolen power in Ukraine, threatened violence against himself and his closest aides and passed "illegal" laws.

As the drama unfolded in Crimea, there were mixed signals from Moscow, which put warplanes along its western borders on combat alert. Earlier it said it would take part in discussions on an IMF package for Ukraine.

The fear of military escalation prompted expressions of concern from the West, with NATO urging Russia not to do anything that would "escalate tension or create misunderstanding".

"This is a drastic step, and I'm warning those who did this and those who allowed them to do this, because this is how regional conflicts begin," he told a news conference.

It was not immediately known who was occupying the parliament and government buildings in the regional capital Simferopol and they issued no demands, but witnesses said they appeared to be ethnic Russian separatists.

Interfax news agency quoted a witness as saying there were about 60 heavily armed people inside. No one had been hurt when the buildings were seized in the early hours by Russian speakers in uniforms that did not carry identification markings.

"We were building barricades in the night to protect parliament. Then this young Russian guy came up with a pistol ... we all lay down, some more ran up, there was some shooting and around 50 went in through the window," Leonid Khazanov, an ethnic Russian, told Reuters.

"I asked them what they wanted, and they said 'To make our own decisions, not to have Kiev telling us what to do'."

There was also anger at the invasion of parliament.

Alexander Vostruyev, 60, in a leather flat cap and white beard, said: "It's disgrace that the flag if a foreign country is flying on our parliament ... It's like a man coming home to find his wife in bed with another man."

About 100 police gathered in front of the parliament, and a similar number of people carrying Russian flags later marched up to the building chanting "Russia, Russia" and holding a sign calling for a Crimean referendum.

One of them, Alexei, 30, said: "Crimea is autonomous. The government in Kiev are fascists, and what they're doing is illegal ... We need to show our support for the guys inside."

About 50 pro-Russia supporters from Sevastopol, where part of Russia's Black Sea navy is based, lined up shoulder-to-shoulder facing police in front of parliament in Simferopol.

Gennady Basov, their leader, said: "We need to organise ourselves like this to maintain order while this illegal and unconstitutional government operates in Kiev.

"Provocateurs are on the march. It is the time for cool heads," he said on Facebook.

The regional prime minister said he had spoken to the people inside the building by telephone, but they had not made any demands or said why they were inside. They had promised to call him back but had not done so, he said.

Russian President Vladimir Putin has ignored calls by ethnic Russians in Crimea to reclaim the territory handed to the Soviet Ukraine by Soviet Communist leader Nikita Khrushchev in 1954.

U.S. Defense Secretary Chuck Hagel said on Russia must be transparent about military exercises along Ukraine's border and not take any steps that could be misinterpreted or "lead to miscalculation during a delicate time".

But Russia's foreign ministry said Moscow would defend the rights of its compatriots. It expressed concern about "large-scale human rights violations", attacks and vandalism in Crimea.

Crimea is the only region of Ukraine where ethnic Russians are the majority, though many ethnic Ukrainians in other eastern areas speak Russian as their first language.

Turkey calls for Crimea to 'act with common sense'

Turkey's Foreign Ministry said that it's important to find a solution to the Ukrainian crisis within territorial integrity and the constitutional system.

"We expect all sides in Autonomous Republic of Crimea, in which our ethnic kin Crimean Tatars also live, to act within moderation and common sense," the Foreign Ministry said in a written statement issued on Wednesday.

Tensions increase in Ukraine, as acting president Oleksandr Turchynov warns there is a "serious risk" of separatism in the region of Crimea, which has a largely pro-Russian population.

The Turkish Foreign Ministry reiterated that it would support all democratic solutions as part of 'friendly nation and strategic partner' to Ukraine's legitimate demands.