Pope Benedict's security was in the spotlight after London police arrested five men on suspicion of preparing an attack in Britain. 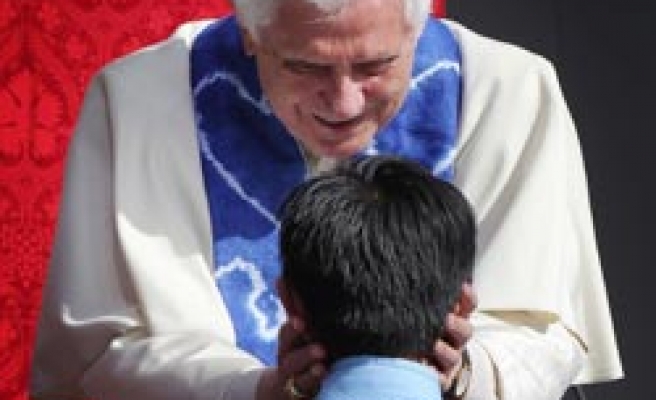 Pope Benedict's security was in the spotlight on Friday after London police arrested five men on suspicion of preparing an attack in Britain.

It was not clear if the planned attack was related to the pope's visit or when it was to have taken place, but it prompted police to take another look at security for the pontiff, who was on the second day of his visit to Britain.

The Vatican said the trip would go on unchanged. Police said they had reviewed their arrangements for the visit and concluded that their plan "remains appropriate".

The arrests were made by anti-terrorism police, who were searching a business in central London and homes in the north and east of the city but had not uncovered dangerous materials.

The Pope has been heavily protected during his four-day visit to Britain, travelling in a custom-built bulletproof car surrounded by security officials.

The Vatican was told of the arrests as the pope was arriving at a Catholic university in southwest London.

Protest against sexual abuse of children

At the university, Benedict reminded his church, reeling from evidence of widespread sexual abuse of children by priests, that its first priority was to provide a safe environment for children.

The shouting of the protesters duelled with the singing of hymns from inside the school, where the pope held what was dubbed "the big assembly" of several thousand Catholic school children from throughout Britain.

Addressing teachers and administrators in the school's chapel, the pope, who was likely to have heard the protesters as he entered, said Catholic schools had to provide "a safe environment for children and young people".

He continued: "Our responsibility towards those entrusted to us for their Christian formation demands nothing less. Indeed, the life of faith can only be effectively nurtured when the prevailing atmosphere is one of respectful and affectionate trust."

In the first substantial protest of his delicate visit to Britain, several hundred people whistled and shouted "Pope must resign!" and "Shame!" as the papal motorcade entered a nearby Catholic school complex.

Some have accused him of being part of a system that turned a blind eye to abuse for decades when he held other Church offices before his election.

The sex abuse scandal, in which priests who abused children were moved from parish to parish instead of turned over to police, has hounded Benedict's five-year-old papacy, even though most of the abuse took place decades ago.

On Thursday, the pope told reporters aboard the plane from Rome that he was shocked by what he called a "perversion" of the priesthood and acknowledged that the Church had not been sufficiently vigilant and decisive in dealing with the scandal.

One of the main themes so far of the pope's trip, only the second by a pontiff in history, is for Britons to re-discover their Christian roots and to be aware of the threat of what he has called "aggressive secularism" that excludes God from the public arena.

The pope, out to win over one of Europe's most secular countries, reminded Britons to beware of extremism, saying that the attempt by totalitarian regimes in the 20th century to eliminate God should provide "sobering lessons" on tolerance.

"Today, the United Kingdom strives to be a modern and multicultural society. In this challenging enterprise, may it always maintain its respect for those traditional values and cultural expressions that more aggressive forms of secularism no longer value or even tolerate," he said.

Benedict has a delicate path to tread in England and Scotland in relations with the Anglican church after his offer last October making it easier for disaffected Anglicans.

These relations could be thrown into sharp focus later on Friday when the pope is due to meet the Archbishop of Canterbury Rowan Williams, the head of the Church of England, the Anglican mother church, at Lambeth Palace in London.

The Catholic Church in Britain runs some 2,800 schools, including 22 universities and the pope defended the work of schools, which are attending by many non-Catholics.

"I pray that this may continue to be a hallmark of the Catholic schools in this country," the pope said during the visit, which tens of thousands of other British school children watched from the classrooms throughout the country.