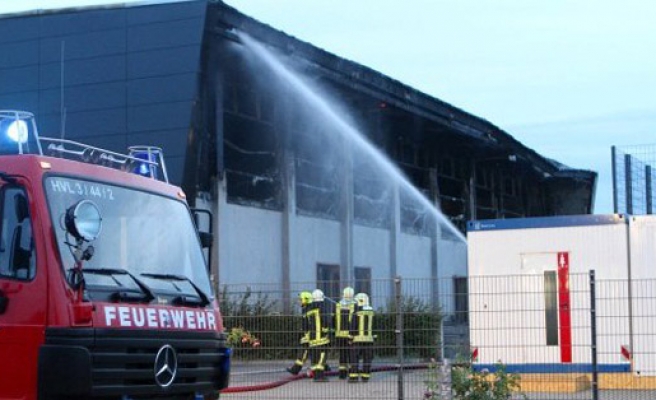 A planned shelter for refugees near Berlin went up in flames overnight, German police said Tuesday, as authorities vowed tough action against perpetrators if the suspected arson is found to be targeted at asylum-seekers.

The sports hall in Nauen, about 20 kilometres northwest of Berlin, was due to house 130 asylum-seekers from September, but it was destroyed in the fire. No one was hurt.

Local police said arson was the likely cause of the fire due to its rapid spread through the empty building.

"If investigations find that this was a xenophobic act, Brandenburg's police and justice will do everything to bring the perpetrators to justice," said the state's president Dietmar Woidke in a statement.

"There will be zero tolerance for any form of xenophobia.

"Be it agitations against foreigners or attacks against people in need in Heidenau or the hindering of the arrival of refugees in Nauen by arson, such action is shameful and unworthy of Germany," he said, calling on residents to "distance yourself from xenophobic mobs".

German authorities have been alarmed by a wave of attacks targeted at refugees, as the country braces to host a record 800,000 asylum seekers.

The town of Heidenau, near eastern Germany's Dresden, was the scene of violent protests over the weekend against the opening of a new centre for refugees.

German Chancellor Angela Merkel on Monday slammed the protests as "vile", reserving her strong words not just for the neo-Nazis but also families with children who joined the anti-migrant demonstrations.

"It is vile for far-right extremists and neo-Nazis to try to spread their hollow, hateful propaganda but it is just as shameful for citizens including families with children to join them" in the protests, she said in her strongest statement to date against a wave of anti-refugee protests.