Ukraine and the West say the separatists could be about to launch a new offensive, echoing a similar accusation the rebels have levelled at the pro-Western government's forces. 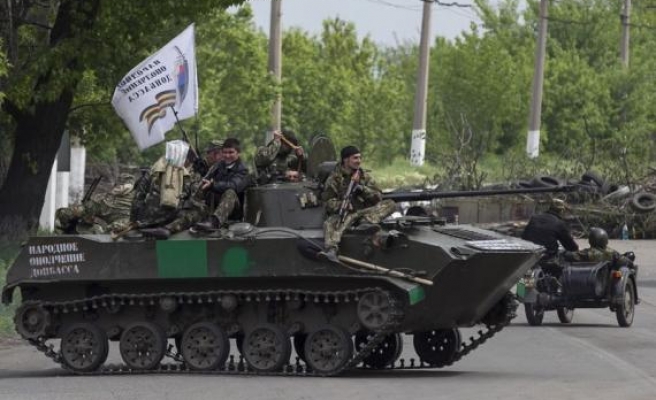 Loud explosions and artillery fire rocked Donetsk airport in eastern Ukraine on Monday, despite attempts to negotiate an end to a battle that is undermining a ceasefire in regions held by separatists.

A Reuters reporter near the strategically important airport saw flashes of artillery fire in several places and heard frequent blasts in new clashes between the pro-Russian rebels and government forces despite the truce agreed on Sept. 5.

A separatist leader, Andrei Purgin, said on Sunday the rebels had reached an agreement with the Ukrainian forces to stop shelling around Donetsk airport, which both Ukrainian and rebel forces lay partial claim to.

But a military spokesman in Kiev said the agreement was meant only to allow the rebels to recover the dead and wounded from the airport and that fighting had abated overnight.

"Now, I understand, they have sorted out the corpses and have started shooting again," said the spokesman, Vladyslav Seleznyov.

Each side accuses the other of violating the ceasefire and the situation in the east has deteriorated since the rebels held leadership elections on Nov. 2, a vote that Kiev and the West said was a violation of the ceasefire deal.

Kiev responded by saying it would no longer fund the rebel-held areas and accusing Russia of sending in troops and tanks to support the separatists, a charge that Moscow denies.

European Union foreign ministers were meeting in Brussels to discuss how to respond to the Nov. 2 elections. Officials said they may agree to impose personal sanctions on more rebels but were unlikely to take new steps against Russia, on which it has imposed several rounds of sanctions.

Ukraine and the West say the separatists could be about to launch a new offensive, echoing a similar accusation the rebels have levelled at the pro-Western government's forces.

Ukrainian military spokesman Andriy Lysenko told reporters in Kiev six servicemen had been killed in the past 24 hours and listed several other exchanges of artillery fire with rebels.

The rebels gave no details of new casualties in a conflict that has killed more than 4,000 people since the rebels rose up in mid-April, a month after Russia responded to the overthrow of a Moscow-backed president in Kiev by annexing the Crimea region.