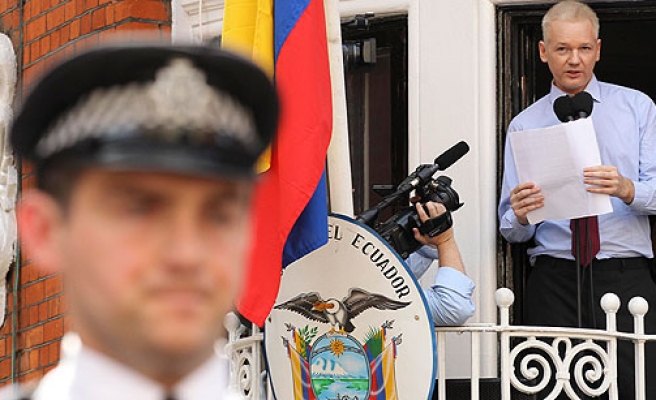 WikiLeaks founder Julian Assange called on U.S. President Barack Obama to end a so-called "witch hunt" against his secret-spilling website, appearing in public Sunday for the first time since he took refuge two months ago inside Ecuador's Embassy in London to avoid extradition to Sweden on sex crimes allegations.

Speaking from within the London mission to avoid being detained by British police who want to extradite him to Sweden for questioning over rape allegations, Assange said the United States was fighting a war against outlets like WikiLeaks.

Comparing himself to Russian punk band Pussy Riot and the New York Times newspaper as also deserving protection from oppression, Assange said the United States risked dragging the world into a dangerous era in which journalists would fall silent. He did not mention the rape allegations.

"As WikiLeaks stands under threat, so does the freedom of expression and the health of all of our societies," Assange said, dressed in a maroon tie and blue shirt, and flanked by the yellow, blue and red Ecuadorean flag. Dozens of British policemen lined up on the pavement below.

"I ask President Obama to do the right thing: the United States must renounce its witch-hunt against WikiLeaks," Assange said in a 10-minute speech which he ended with two thumbs up to the world's media.

Foreign ministers from across South America strongly supported Correa's stance at an emergency meeting in Ecuador on Sunday, saying countries had a sovereign right to grant asylum.

Ecuador's decision marked the latest twist in a tumultuous journey for Assange since he incensed the United States and its allies by using his WikiLeaks website to leak hundreds of thousands of secret U.S. diplomatic and military cables in 2010, disclosures that often embarrassed Washington.

Assange, 41, took sanctuary in Ecuador's embassy in June, jumping bail after exhausting appeals in British courts against extradition to Sweden, where he is wanted for questioning over allegations of rape and sexual assault against two women.

He says he fears the authorities in Sweden will eventually hand him over to the United States where, in his view, he would face persecution and long-term imprisonment. The United States says it is not involved in the matter.

To let Assange avoid arrest by stepping outside the embassy, a balcony door on an upper floor was removed, leading to his first public appearance since seeking refuge in the diplomatic mission.

Despite having to stomach the defiance of Assange scolding the world's superpower from a balcony in its capital, Britain's Foreign Office refused to comment.

Speaking behind the condor of the Ecuadorean coat of arms on the white railing of the balcony, Assange thanked Correa and Ecuador's Foreign Minister Ricardo Patino, whom he praised for standing up against oppression.

"The sun came up on a different world and a courageous Latin American nation took a stand for justice," Assange, whose cropped hair indicated a recent cut, said from the balcony.

Assange's attempt to escape extradition has caused a diplomatic tussle between Britain and Ecuador, which accused London of threatening to raid its embassy and casting the dispute as an arrogant European power treating a small country like a colony.

Foreign ministers from the Union of South American Nations (UNASUR) bloc met in Ecuador's coastal city of Guayaquil and backed Correa's government, saying diplomatic missions must be protected and condemning Britain's "threat to use force."

Speaking in Guayaquil -- which also hosted a meeting on Saturday of ministers from the ALBA group of leftist-led Latin American nations, which includes Venezuela and Cuba -- Ecuador's Patino said the government was considering asking the International Court of Justice in The Hague to adjudicate.

Patino said Ecuador had a duty to protect Assange, but he indicated that there was still room for discussion.

"If talks with Britain, Sweden, or the United States could lead to a clear written statement guaranteeing Mr Assange's life and safety, it would be possible for him to go to Sweden to face trial," Patino told reporters after the UNASUR meeting.

Speaking in London, Assange praised a dozen Latin American nations which he said had rallied against Britain, and he said the United States was at a turning point that could drag the rest of the world into an oppressive new era.

He said U.S. Army intelligence analyst Bradley Manning, accused of the largest leak of classified documents in U.S. history to WikiLeaks, was a hero who should be released by the United States. Manning faces life in prison if convicted.

"If Bradley Manning did as he is accused, he is a hero and an example to all of us and one of the world's foremost political prisoners," said Assange. "Manning must be released."

More than 50 of Assange's supporters, many of whom have slept on cardboard sheets outside the embassy since Wednesday, decorated barriers with messages of support and placards reading "asylum - end the witch-hunt."

"They are not treating him fairly," said Chantal, 28, a French pro-WikiLeaks blogger who had traveled overnight with a friend from near Paris in the hope of seeing Assange speak.

"Britain has shown it doesn't respect human rights -- political asylum is a right which should be respected by all countries," she said. She refused to give her surname.

There was also a large crowd of curious passersby and bemused shoppers with bags from the upmarket Harrods store nearby watching the proceedings from across the street.

"He is thankful to the people of Ecuador and to President Correa for granting him asylum," Garzon said.