French officials estimate the number of illegal immigrants in Calais at 1,500, up by 50 percent in the past year, their numbers boosted by conflict in the Middle East and north Africa. 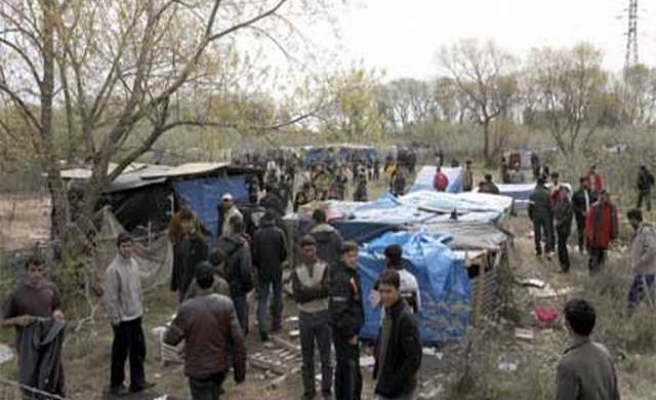 It took Eritrean migrant Adhanom Ghabrai two years and several brushes with death to reach northern France from his east African home. Now 35 km from his destination, he says no border controls can stop him from reaching Britain.

"England is my goal," Ghabrai, 28, said outside his makeshift tent near the French port city of Calais. "The question is not 'if' I succeed but 'when'," he said in English, adding he had tried "at least 40 times" since May.

French officials estimate the number of illegal immigrants in Calais at 1,500, up by 50 percent in the past year, their numbers boosted by conflict in the Middle East and north Africa.

They are the latest manifestation of Europe's struggle to deal with the influx of the world's poor into a region they see as a haven in which to build a better life.

The fact that Britain is not one of the 26 European Union members who have abolished controls at their common borders has long made Calais one of the flashpoints in that struggle.

In Britain, the latest build-up of illegal immigrants in Calais has fuelled anti-European Union sentiment. In France, Marine Le Pen's anti-immigration National Front party, which won around 14 percent of the Calais vote in town hall elections in March, says it is seeing local support rise.

To reach Calais, Ghabrai, a former soldier, fled an army camp, crossed the Sahara and sailed across the Mediterranean Sea from Libya in an overcrowded ship full of migrants to the Italian island of Sicily. Ghabrai did not give precise details of his subsequent journey but said he made it to Calais by stowing away on trains and seeking help from fellow migrants.

Like hundreds of other east Africans, he benefited from porous borders in unstable Libya and a European Court of Human Rights ruling against the practice of forcing ships loaded with migrants back to the countries from where they came.

The influx has led to violent clashes in Calais between migrants and with police, while causing diplomatic tension between France and Britain.

After migrants last week tried to storm a ferry bound for Britain, the centre-right mayor of Calais Natacha Bouchart urged British leaders to share the cost of policing the border, which she wants pushed back to Dover, across the Channel in England.

Britain's Conservative-led government has taken a tough stance on illegal immigrants, denying them the right to rent homes, open bank accounts or obtain driving licences. It has no plans to enter the European visa-free travel zone.

He said Britain would offer to send to Calais port 20 km (13 miles) of steel barriers, 3.3 metres high (11 feet) which had been used at a NATO summit in Wales.

That proposal was an example of "very British cynicism", said France Terre d'Asile, an aid group for asylum seekers.

"It's easy to say it's not your problem," said Philippe Mignonet, Calais' deputy mayor. "But it's useless to say it's a French problem. It's also a problem in England, from England."

The migrant problem in Calais is not new and France has attempted many ways of addressing humanitarian needs, finding permanent shelter for migrants who live in makeshift tents in and around Calais or sending them home. But every time a major camp has been closed, the migrants have returned.

Aid workers say new migrants, who travelled from southern Europe through the free-travel zone, are east Africans who are poorer and less well-connected than earlier waves of migrants from Pakistan and Afghanistan.

Calais town hall's plan to supply food and medicine at a day centre further inland may alleviate short-term humanitarian needs but will not turn migrants away, said Philippe Wannesson, a volunteer who runs a blog 'Passeurs d'hospitalite' ("Traffickers in Hospitality").

"What's changed is those showing up since September or October spent their money to cross the Mediterranean, and now they have nothing. So they take more risks," he said.

With no money to pay smugglers at the border, new arrivals seek strength in numbers to overwhelm security, as during the ferry storming. Groups have taken to surrounding trucks bound for Britain, stopping them long enough to open loading hatches.

In Ghabrai's camp, where hundreds of Eritreans live in makeshift tents around a football pitch, most migrants said they wanted to reach Britain because of the language and because they believe its economy is more open and dynamic.

But Calais' deputy mayor argued that many migrants were under the sway of smugglers who convince them that Britain is a promised land so they will pay more for a longer journey.

Despite high-tech detection technology at the border, including carbon dioxide and heart-beat sensors, and inspections using dogs, 10 to 15 migrants make it through every day.

Once they arrive, most have little choice but to get to work to start paying back the huge debts accumulated by their families to send them away.

"That's why so many of the migrants become smugglers themselves, because they know the system so well and are well placed to perpetuate it," said Mignonet.