Demonstrators rally in support of Nikos Romanos, who watched student friend die after being shot by police officer during anti-austerity riots 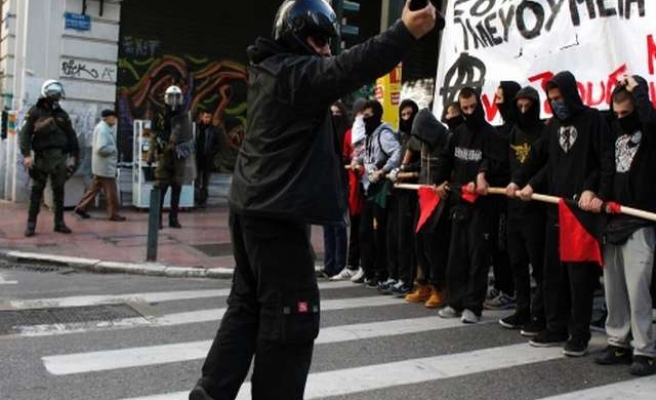 A series of rallies and demonstrations are taking place in solidarity of hunger striking convict Nikos Romanos.

The 21-year-old is a convicted bank robber who was present during the murder of his friend Alexandros Grigiropoulos, a 15-year-old student who was murdered by a policeman during the 2008 anti-austerity riots in the Greek capital.

Since the murder of his friend in his presence, Romanos became a symbol of rage against authority.

In a letter released Tuesday titled “Dancing with Death for 24 days,” Romanos accused the government for his possible death.

He calls for people to riot on Dec. 6, and stated that it is worth dying for your dreams, and explicitly stated “Long live anarchy.”

Romanos has been on hunger strike for 26 days now as his request to receive a furlough to attend classes at the Technological Institute was rejected.

The Judges Council, which rejected his request, said that Romanos’ detention was mandatory as he still faced pending court cases.

Just one day before the anniversary of the death of Grigoropoulos, which sparked weeks of some of the worst riots seen in the Greek capital, the demonstrations are continuing.

There have been rounds of solidarity all around Greece which are said to climax Saturday with the anniversary of Grigiropoulos’ death. Thousands clashed with the police Tuesday and students occupied the main building of Aristotle University of Thessaloniki Wednesday.

Since Thursday afternoon, 30 people have occupied the building of the private sector union, the General Confederation of Employees of Greece, in central Athens in solidarity with Romanos.

A sledgehammer was used in order to break the glasses of the private bank, Alpha, in the southern suburb of Glyfada. Molotov bombs were thrown inside the premises.

The Evelpidon court was also targeted with gas canisters and several ATMs as well as OTE telecom vehicles have been burned down.

A solidarity demonstration is taking place outside the hospital where Romanos is holding his hunger strike, while hospital employees are also demanding that Romanos’s claims be met.