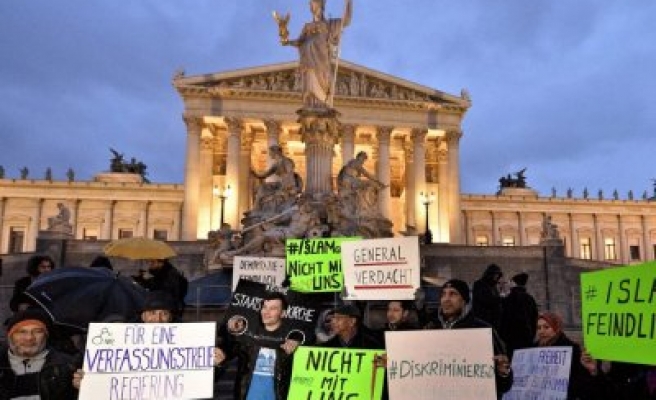 World Bulletin / News Desk
The Austrian parliament voted by majority to approve a controversial bill on Wednesday, which aims to revise a historic law on the status of Muslims in Austria.

Islam has been an official religion in Austria since 1912. The Islam law, known as Islam Gesetz, was introduced by Austria's last emperor, Franz Josef, after the Austro-Hungarian Empire annexed Bosnia-Herzegovina.

The bill, prepared by Austria's coalition of Social Democratic Party and People's Party, passed into law at Wednesday's general assembly meeting that witnessed heated debates between the deputies from government and the opposition.

The first to take the floor against the bill, Heinz-Christian Strache -- an MP from the far-right and anti-immigrant Freedom Party -- said the parliament needs to pass a stricter law against "radical Islamists."

Strache argued that imams must preach in German not in their own languages.

"Islam is not a part of Austria. The bill should also include ban on minarets and the burqa, because these are political symbols. The bill is way off the mark," he said.

Turkish-origin Alev Korun from the Green Party stated that the law must be prepared in line with the current conditions, saying "Muslims are part of Austria just like believers of other religions."

Korun expressed her party's support of the article requiring Austria-born imams to be employed after receiving education at Austrian universities.

"The bill must not lead to suspicious looks towards Muslims. As Greens, we are opposing the bill since its disadvantages outnumber its advantages," she added.

She further voiced their demand for transparency about the ban on foreign funding for Islamic organizations in the country.

Federal Minister Josef Ostermayer from the Social Democratic Party defended the bill, saying they prepared it after consulting with the representatives of both the Austria Islamic Community and the Alevi community, adding that community leaders approved the bill.

The Austria Islamic Community, or IGGiO, is the official religious institution of Muslims living in Austria.

He stressed that the "Islam bill" is not a law on terror or security, but was drafted only to adjust, update and modernize the existing 1912 Islam Law.

Ostermayer also suggested that the bill protects the rights of all Muslims.

"We don't want imams that are appointed by other governments," he said.

Kurz said he believed Islam belongs to Austria, saying "Austria recognized Islam in 1912. More than 500,000 Muslims live here. As a country that is home to immigrants, we cannot ignore Muslims."

The three and a half hour-long debate was followed by two amendment motions by the government, both of which were approved before the general assembly proceeded to voting.

The motions will extend the date from December 2015 to March 2016 for mosques to shift from the status of a foundation to that of a legal entity, and enabled the imams to be paid their salaries by the Austria Islam Community.

The law guarantees some of the existing rights of Muslims, including religious education in public schools, while it includes articles that are considered as a breach of the equality of Muslims and their freedom of religion and organization.

The Austria Islamic Community that conducted the talks over the bill with the federal government voiced concerns over the unequal treatment between religious communities.

The law imposes a standardized German translation of the Qur'an and other religious texts, and regulates the teaching of Islam in the country.

The Islamic Community wants to have the authority to choose instructors who will educate the imams and to plan their own curricula.

The law also allows authorities to cancel some religious activities because of possible security concerns. According to the bill, mosques that do not have a legal entity will also be closed down.

Opponents say the government wants to have more control over mosques by not accepting association-status mosques, which is said to be against the right to form an association.

The law has also drawn criticism from Muslims across the world.

The proposed legislation, however, does contain provisions that will benefit the roughly 500,000 Muslims living in Austria, including the right for Muslims to take time off during Friday prayer and to go on holiday during certain religious festivals.

In addition, schools and other public institutions, including hospitals, the army and prisons will have to offer halal food in line with Muslim dietary requirements.