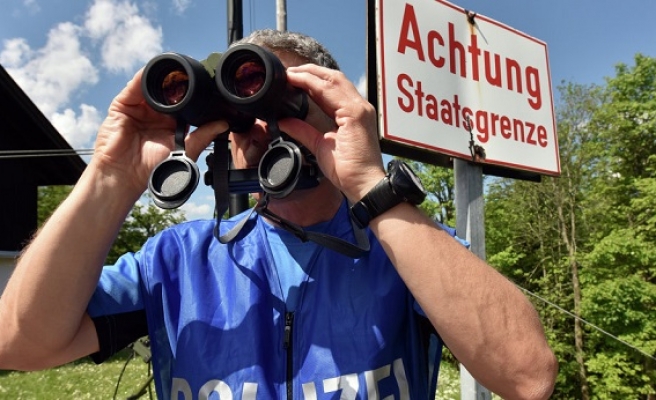 Austria and Slovakia announced they were reinstating border controls Monday, following a similar move by under-pressure Germany which said it could face up to one million migrant arrivals this year.

Berlin's shock move, which struck at the heart of the EU's passport-free Schengen zone, had an immediate knock-on effect and ramped up the pressure on interior ministers holding emergency talks in Brussels later Monday.

Heading into the talks, Austrian Interior Minister Johanna Mikl-Leitner said Vienna would "proceed as Germany did... and we will conduct these temporary border controls."

Germany has admitted that Europe's biggest migration crisis since World War II has pushed it to the limit and Vice Chancellor Sigmar Gabriel said there were "many signs that Germany this year will take in not 800,000 refugees, as forecast by the interior ministry, but one million."

And the United Nations refugee agency warned the confusion surrounding border policies around Europe could leave migrants, many of whom have made gruelling treks through the continent, in "legal limbo".

Underscoring the scale of the challenge, Hungarian authorities said Monday they had registered a record 5,809 migrants streaming into the country the day before, amid reports that neighbouring Serbia might try to "push through" as many as 30,000 people before draconian new laws come into force.

Hardline Prime Minister Viktor Orban is racing to finish a controversial anti-migrant fence on Hungary's frontier by Tuesday, when it will start arresting illegal migrants.

The UN said Hungary had effectively stopped registering the thousands of migrants crossing from Serbia and was transporting them straight to the Austrian border by train.

Germany's surprise move had an immediate impact on the ground.

"We have been walking through Europe for 22 days," said 27-year-old Hatem Ali Ahaj, who suffers from asthma and was struggling to catch his breath.

"We thought that Germany was the only country that would treat us like human beings," he said.

After a human trafficker was arrested shortly afterwards at the same post, police said neither refugees nor smugglers could be seen Monday.

A queue of cars however snaked one kilometre, with irate drivers including pensioner Helmut Zimmermann complaining: "I would never have imagined such poor organisation."

With the EU's flagship Schengen policy under mounting threat, ministers from the bloc will gather later Monday in Brussels to try and heal deep divisions over migrant policy.

Germany had previously signalled it would throw open the country's borders to Syrian refugees.

But the abrupt U-turn and admission that even Europe's economic powerhouse cannot cope with the record influx has underlined the importance of interior ministers' talks in Brussels later Monday.

The European Commission -- the EU's executive -- last week unveiled a plan to redistribute 160,000 migrants across the continent to relieve pressure on "frontline" states such as Italy, Greece and Hungary.

However, this has run into stiff opposition from several Eastern European states such as the Czech Republic and Slovakia.

Czech Prime Minister Bohuslav Sobotka insisted his country would never accept compulsory quotas, saying the system "won't work", while Slovakia said it would try to block any such binding measures.

But the Commission stressed that the German border decision underlined "the urgency to agree on the measures" it had put forward.

With the human side of the crisis prompting a wave of sympathy particular in Western Europe, tragedy struck again off the coast of Greece, with 34 more migrants -- including four babies and 11 children -- drowning when their overcrowded wooden boat capsized in high winds.

The International Organization for Migration has said that more than 430,000 people have crossed the Mediterranean to Europe this year, with 2,748 dying en route or going missing.

Britain, which is not part of the Schengen passport-free zone, on Monday appointed a minister to deal specifically with the 20,000 Syrian refugees the country has agreed to resettle over the next five years from camps bordering the war-torn country.

Justifying Berlin's decision to introduce border controls, Interior Minister Thomas de Maiziere said Sunday that "the aim of this measure is to stop the current influx to Germany and to return to an orderly process."

Migrants must understand "they cannot choose the states where they are seeking protection," he told reporters.

But Merkel's spokesman Steffen Seibert stressed that Germany was not slamming its doors completely shut.

"Temporary border controls are not the same as closing the borders, that's completely different. Refugees will continue to come to Germany and we hope that this will happen in a more orderly manner," he said.

But the interior minister of southern Bavaria state, which has taken the brunt of the influx, said controls would be maintained for "several weeks".

Merkel has previously warned that the Schengen zone of 26 countries was under threat if the EU failed to work together on coping with the inflow.

For those already in Hungary, the confusion over Europe's policy has meant a fresh scramble to get to their destination.

"I cannot wait here. Time might be running out," said Fayik, a slight and smiley Afghan who can speak five languages.

"I don't like doing illegal things, but sometimes there is no choice. I have been very quick. I have to continue to be quick," said the 20-year-old.