Hundreds of refugees have disembarked from the first fleet of buses carrying them from Budapest. 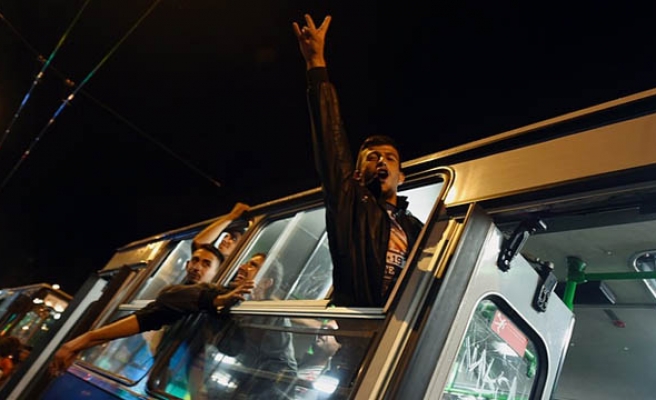 The first bus carrying refugees who have been stranded in the Hungarian capital reached the Austrian border early Saturday, after Vienna and Berlin agreed to take in thousands of refugees desperate to start new lives in Western Europe.

Some 50 refugees from the 1,200 or so people who set off on foot from Budapest for the Austrian border earlier -- including some in wheelchairs and on crutches -- reached the Hegyeshalom-Nickelsdorf border post, Austrian police said, in the first of 100 vehicles laid on by the Hungarian authorities.

Several other buses earlier also left the Keleti train station in the Hungarian capital carrying people who have been stuck there for days in makeshift refugee camps waiting for trains to Austria and Germany.

Hungary has become the newest flashpoint as hundreds of thousands of refugees try to cross its borders on their journey to Western Europe, particularly Germany, which has said it will no longer deport Syrian refugees and will take in 800,000 people this year.

Berlin urged an end to "recriminations" as Britain said it would take in thousands more Syrian refugees -- but only directly from camps, not those already in overstretched Hungary, Greece and Italy, who are demanding their EU partners do more to help.

The human cost of the crisis was exposed this week when the body of Syrian toddler Aylan Kurdi, which was buried with his brother and mother in his war-torn hometown of Kobane on Friday, was found washed up on a beach in Turkey.

On board one of the buses to Austria, exhausted refugees veered between concern and relief as they waited to see if their long journeys to Western Europe were about to come to an end. Many were nervous after Hungary tried to transport a trainload of refugees heading for Austria into a camp on Thursday.

"I was not comfortable leaving the Keleti railway station," said 26-year-old Syrian Mohammed.

But he relaxed as he caught a glimpse of the Danube river through the window: "I had heard about it, but I've never seen it," he said. "It's beautiful."

Between 800 and 3,000 refugees are expected to arrive at the Austrian border in the coming hours, said police spokesman Werner Fasching, adding that law enforcement and workers from the Red Cross were waiting to receive them.

Some 600 beds have been made available in Nickelsdorf for the new arrivals and neighbouring regions have also mobilised to ensure they are provided with food and medical care, he said.

Some 50,000 refugees entered Hungary last month via the western Balkans, with a record 3,300 arriving on Thursday, according to United Nations figures.

Hungary has responded with tough new anti-immigration measures, including by criminalising unauthorised border crossing and any damage to a razor-wire fence recently erected along the border with Serbia.

Right-wing Prime Minister Viktor Orban sparked anger by saying his country did not want more Muslim refugees and warning that Europe would lose its Christian identity.

"We are very happy that something is happening at last. The next stop is Austria. The children are very tired, Hungary is very bad, we have to go somehow," 23-year-old Osama from Syria told AFP as he set off from Hungary.

Poor camp conditions and slow registration procedures for asylum-seekers appear to have contributed to rising tensions at Hungary's refugee facilities.

Earlier Friday, about 300 people had broken through a fence at a Hungarian refugee camp and clashed with police, while another 300 escaped from a collection point for refugees intercepted at the border.

Meanwhile in the town of Bicske, 40 kilometres west of Budapest and home to one of Hungary's main refugee camps, a 51-year-old Pakistani man died after up to 350 refugees escaped from a train guarded by police and headed westward along the tracks.

The UN High Commissioner for Refugees Antonio Guterres warned Friday the 28-member EU faced a "defining moment" and called for the mandatory resettlement of 200,000 refugees by EU states.

In a tragedy that has brought home the urgency of the crisis, Abdullah Kurdi, the father of Syrian toddler Aylan, returned home Friday to the border town of Kobane to bury his two sons and wife.

"I will have to pay the price for this the rest of my life," he told mourners, after carrying his sons' bodies to Kobane's Martyrs' Cemetery.

The family were driven out of Kobane in June after fierce fighting between Kurdish militants and Islamic State jihadists.

Photos showing the little boy's body lying in the surf of a Turkish resort, washed up after the boat taking the family to Greece sank, has galvanised opinion on the need to help the refugees.

EU foreign ministers met in Luxembourg to discuss the crisis ahead of a "State of the Union" address next week by European Commission President Jean-Claude Juncker, when he will lay out new measures that could well exacerbate divisions in the bloc.

Juncker has proposed mandatory quotas for resettling 160,000 refugees, after an earlier plan for 40,000 met stiff opposition, notably from Hungary, and attracted offers of places for only 32,000.

Germany and France back the system but Hungary, the Czech Republic, Poland and Slovakia together rejected any quotas in a statement on Friday.

If some governments are wary, many ordinary Europeans were taking the initiative and providing all the help they can, from social media campaigns in Austria to street protests urging government action in Spain.

Charities across Europe reported a surge in donations from people shocked by the heart-rending images from Turkey -- UNICEF said donations had more than doubled.

"There is an enormous response from the public," Christian Peregrin, spokesman for the Malta-based refugee Offshore Aid Station, told AFP. "The tide of indifference is shifting."