Hundreds of people, some waving white roses, gave one of President Vladimir Putin's biggest critics a hero's welcome when he arrived in Moscow on the overnight train from Kirov 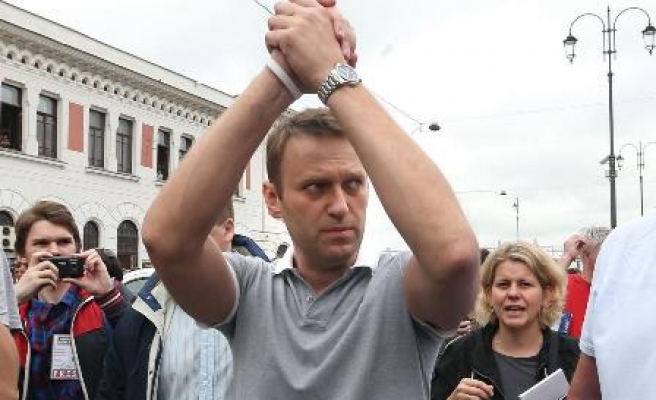 Russian opposition leader Alexei Navalny told cheering supporters on Saturday he wants to contest and win an election to become Moscow mayor after being freed on bail while he fights a five-year jail sentence.

Hundreds of people, some waving white roses, gave one of President Vladimir Putin's biggest critics a hero's welcome when he arrived in Moscow on the overnight train from Kirov, the industrial city where he was convicted of theft on Thursday.

The crowd applauded the tired-looking anti-corruption campaigner as he stepped off the train and chanted: "Navalny is our mayor" and "We represent power".

"We have a big and difficult election campaign ahead of us. Seven weeks of work non-stop. And that is only the beginning," Navalny told the crowd through a megaphone. "Let's fight for political power in the country right now."

Punching the air with his fist, his wife Yulia at his side, he said: "We will certainly win! Let's get to work! We are going for elections and we will win."

Navalny, 37, can run for mayor on Sept. 8 if he can string out his appeal until then. Winning would hand him a propaganda victory and give him of the most influential jobs in the country, with offices a few hundred metres from the Kremlin.

But opinion polls show Navalny trailing far behind Sergei Sobyanin, who is seeking a new term as mayor, and suggest he has little chance of defeating a Putin ally who has state media behind him and the levers of power at his disposal.

Navalny, who says he would one day like to be president, must bank on his support being boosted by public indignation over the toughness of his sentence - on charges he says were invented and intended to sideline him as a rival to Putin.

More than 3,000 people protested close to the red walls of the Kremlin to demand his release on Thursday and thousands more staged rallies in other cities to show solidarity with him. More than 200 people were detained.

Under the watchful eye of police, Navalny told his supporters at Moscow's Yaroslavl Station that it was thanks to their pressure that he had been released.

"You have made it possible to release these men the next day," he said, referring to himself and Pyotr Ofitserov, who was sentenced to four years as his accomplice. "Compared to that, it is easy to win elections."

Navalny, who led protests in Moscow that began against Putin in December 2011, was convicted of stealing at least 16 million roubles ($494,000) from a timber firm when he was advising the Kirov regional governor in 2009.

The sentence was unexpectedly tough and was seen by Putin's opponents as part of a wider clampdown on dissent since the president began a six-year third term in May, 2012.

But it was followed by an equally surprising move on Friday when a judge approved a prosecution request to free Navalny pending an appeal so that he could run in the Moscow election.

Experts said it was unprecedented for the prosecution to seek bail on such terms after sentencing, and political experts said it pointed to differences in the Kremlin over how to handle Navalny and unease over the renewed protests.

Navalny's supporters say the decision to release him could also be an effort by Russian authorities to legitimise the election and Sobyanin's likely victory.

Navalny's support is mostly limited to the urban middle-class and youth, and anti-Putin protests last year failed to take off in the provinces. The president remains Russia's most popular politician, polls show.

There is no indication that Navalny's release from custody will affect the court's ruling on his planned appeal.

The acquittal rate in Russia is about half a percent, or one in 200, and has declined in recent years, said Pavel Chikov, a human rights lawyer and head of legal rights group Agora.