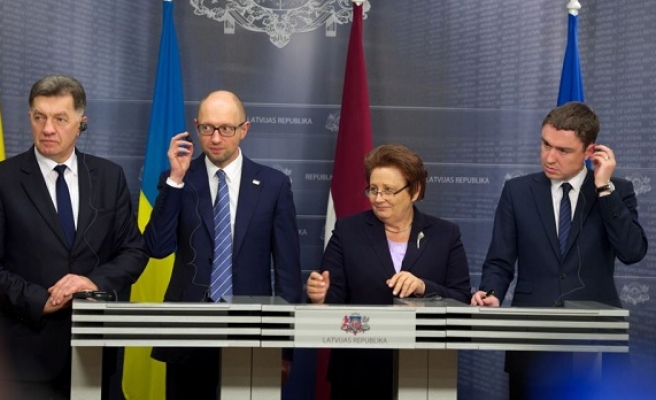 Ukraine along with Estonia, Latvia and Lithuania have slammed Thursday Russian-German initiative to build a second Nordic Stream natural gas pipeline under the Baltic Sea.

The project would cost Ukraine alon up to $2 billion a year in lost revenues as it takes away business from the land-based pipeline that transits Ukraine and Poland, Ukrainian Prime Minister Arseniy Yatsenyuk said.

Poland and Slovakia would also lose $300 million and $800 million, respectively, in annual pipeline revenues, while it would deprive the European Union of real energy independence, he said.

"We do believe that this project has nothing based on economic issues -- it is more a political one," he said.

Yatsenyuk, whose government has been fighting Russian-backed separatists since last year in eastern Ukraine, called on the EU to "seriously" examine the issue.

He warned against allowing Moscow to "facilitate a bottleneck and to control the energy market of the EU, too."

Latvian Prime Minister Laimdota Straujuma said she was "highly concerned" about the project and called for a thorough EU review of the proposed seabed pipeline.

Estonian Prime Minister Taavi Roivas questioned whether the plan was in compliance with EU rules.

"It is quite clear that it would have a very significant negative impact on the gas supply of Ukraine," Roivas said.

For both Germany and Russia, the new pipeline would eliminate the uncertainty about winter gas supplies caused by a constant tug of war between Ukraine and Russia over gas issues, while it would boost Germany as a distribution hub for Russian gas in Western Europe.