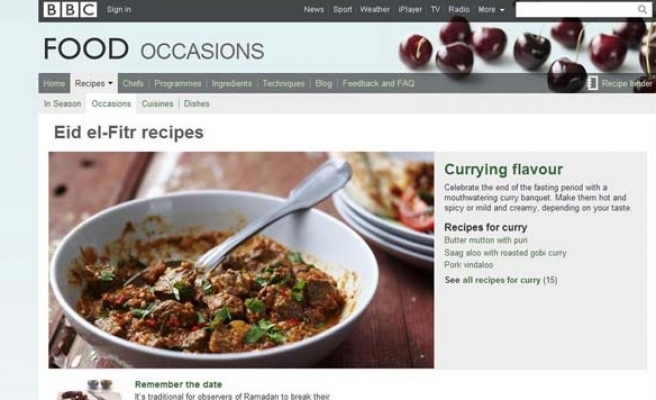 The British Broadcasting Corporation (BBC) has apologized through the Anadolu Agency (A.A) for promoting pork dish for the major Muslim holiday of Eid al-Fitr.

BBC told the A.A that the dish "pork vindaloo" was included among Eid al-Fitr recipes posted on its web-site by mistake.

It said that the automatic suggestion system caused the mistake.

BBC apologized for the inconvenience it caused.

Hakan Camuz, chairman of the Independent Industrialists' & Businessmen's Association (MUSIAD) in the United Kingdom, told the A.A that BBC had the vision to be aware of importance of the Eid al-Fitr for Muslim people. "But it is unacceptable that BBC could ignore the fact that Muslim people do not eat pork. This is disrespectful," he said and called on BBC to apologize from Muslim people.

Ahmed Versi, editor of the Muslim News, said that BBC made a big mistake by promoting a pork dish for Eid al-Fitr.

Eid al-Fitr is the three-day Muslim holiday celebrating the end of Ramadan, the holy month when Muslim people fast from dawn to sunset.