Lukashenko, 61, once called Europe's last dictator by Washington, has led the landlocked eastern European country closely allied to Russia since 1994 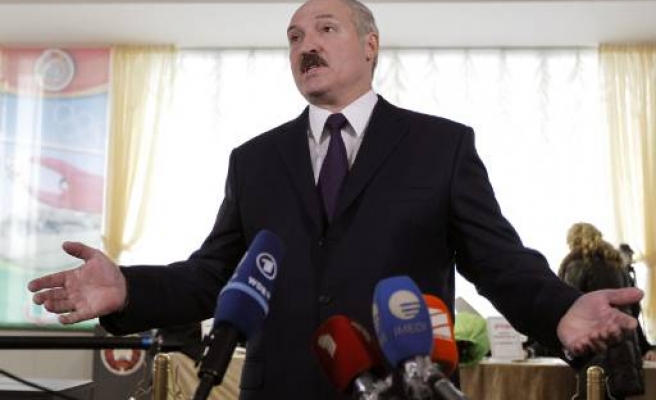 Belarussians were voting Sunday in an election that is likely to see authoritarian President Alexander Lukashenko claim a fifth term, with the EU possibly lifting sanctions against him if the polls take place without incident.

While imposing Soviet-style economic controls and jailing opponents, Lukashenko enjoys a degree of popular support for his folksy, outspoken style and his regime's durability, now making him Europe's longest-serving leader.

The result of the polls are in little doubt, particularly as the authorities have mustered a massive early vote, accounting for at least 36 percent of the electorate, according to the country's electoral commission.

Liudmila Vauchok, a six-time Paralympic medallist in cross-country skiing and rowing, said she had voted for Lukashenko, saying he had brought "reliability and calm" to the country.

"Whatever happens, Belarus is flourishing," Vauchok, who came to the polling station in her wheelchair with her three-year-old daughter, told AFP. "Our system is established. I wouldn't like to be in the president's place as things are very complicated now. The main thing is for there not to be a war."

"He has his own opinion and he does not bend to anyone's will, he protects the interests of his people," said retired university teacher Valentina Artyomovna as she bought pastries from her polling station's buffet, part of the authorities' attempt to create a "holiday atmosphere" for election day.

The Belarussian president is propped up by Russia, which supplies the country of 9.5 million with cut-price energy, valuing Belarus as an ally and buffer against NATO member states such as Poland.

But Lukashenko has been known at times to publicly oppose Russian President Vladimir Putin.

Lukashenko's incarceration of Belarussian political opponents has led to his international isolation and the imposition of Western sanctions on the country's officials following disputed polls in 2010.

The European Union however is ready to suspend sanctions against Lukashenko after the surprise release in August of the country's last political prisoners, European sources told AFP on Friday.

The proposal has sparked an outcry from opposition figures who have spent years protesting Lukashenko's authoritarian ways.

Opposition leader Mikola Statkevich -- who was pardoned in August after spending five years in jail -- told AFP: "If they are together with this murderer, this criminal, then democracy is just words."

On Saturday, the Belarussian dissident who won the 2015 Nobel Literature Prize, Svetlana Alexievich, said the EU should beware of Lukashenko.

"Every four years, new European officials come to power and think they can solve the Lukashenko problem without knowing that he is a man who is untrustworthy," Alexievich told a news conference in Berlin.

"We know one thing: with Lukashenko in power, the situation will never change," he told the rally, which attracted a relatively small turnout.

A shrewd operator and exploiter of tensions between Moscow and the West, Lukashenko recently raised his standing with the EU by hosting peace talks in Minsk on eastern Ukraine.

Lukashenko is believed to be grooming his son, Nikolai known as Kolya, as his successor. The 11-year-old boy cast his father's ballot on Sunday at a polling station on the outskirts of Minsk.

International OSCE observers are monitoring the polls, but the main opposition says Lukashenko has already falsified the ballot by barring its leaders from standing.

Lukashenko has dismissed the three virtual unknowns, only one of whom, Tatiana Korotkevich, has bothered to run a campaign.

"The president here has masses of powers, from security to the economy, that so far a person in a skirt cannot carry out," Lukashenko said of 38-year-old Korotkevich after having voted on Sunday. "But I am very glad a woman stood, honestly."

As the only alternative for opposition supporters, Korotkevich made a strong showing in opinion polls, but even her team doubts she could push the election into a second round.