The demonstrators braved scorching temperatures in Brussels, some holding up signs calling on Martin to remain behind bars. 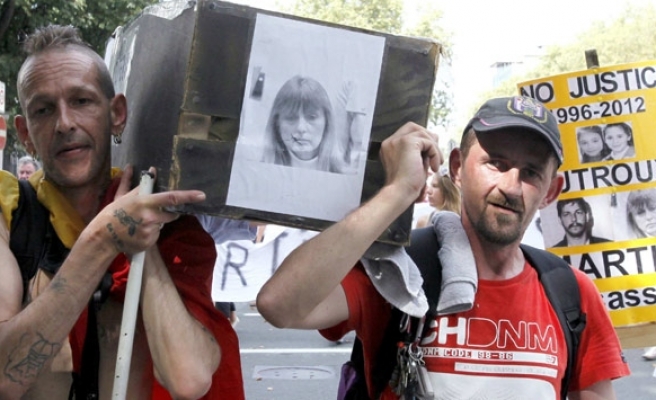 About 2,000 Belgians took to the streets on Sunday to protest against the possible early release from prison of the ex-wife and accomplice of child murderer Marc Dutroux and demand tougher rules on freeing convicts.

A court ruled in July that Michelle Martin would be able to live in a convent now that she has served 16 years of her 30-year sentence - outraging a nation that was horrified by the crimes committed by the woman and her ex-husband.

Dutroux was found guilty of kidnapping and raping six girls in the mid-1990s. He killed two of them and left two others to starve to death in a makeshift dungeon. Martin was convicted of helping him.

The demonstrators braved scorching temperatures in Brussels, some holding up signs calling on Martin to remain behind bars.

"We want a fundamental reform of the justice system ... and more place for the victim (in judicial decisions)", Jean-Denis Lejeune, the father of one of the victims, told journalists at the rally.

Martin's release is currently on hold pending an appeal by prosecutors.

Lejeune issued a list of proposals, including tighter control of prisoners granted early release and more careful review of such cases. Under current Belgian law, criminals are eligible for release after serving a third of their sentences, so long as they meet certain conditions.

Magistrates oppose Lejeune's proposals, and have issued a statement defending the current system.

"To be effective, penal policy must besides punishment offer positive measures to convicts - measures that are controlled and respected," said Herve Louveaux, president of Belgium's magistrates union.

Justice Minister Annemie Turtelboom is working on a proposal that would make some sentences ineligible for parole, she told Le Soir newspaper on Saturday.

Martin's possible release has already sparked protests in the village of Malonne, 60 km (37 miles) southeast of Brussels, location of the Clarisse Convent where she is scheduled to live.

The convent is situated next to a nursery school and offers retreats and musical performances. Over the past two weeks, five demonstrations have been held against her, and the convent was daubed with anti-Martin graffiti. Police have resorted to teargas on at least one occasion to control an angry mob, according to the Belga news agency.

Psychiatrists have said Martin is unlikely to re-offend. A judgement on prosecutors' appeal is expected on Aug. 28.

Retiree Christian Gaziaux, a Malonne resident with three grandchildren, said he would not welcome Martin's arrival.

"Especially here, where there are many schools, many children, I feel that it is unhealthy to bring a person like that," he said. "It's not the first time that she has committed this kind of act. If something happens in six months, what will they say?"