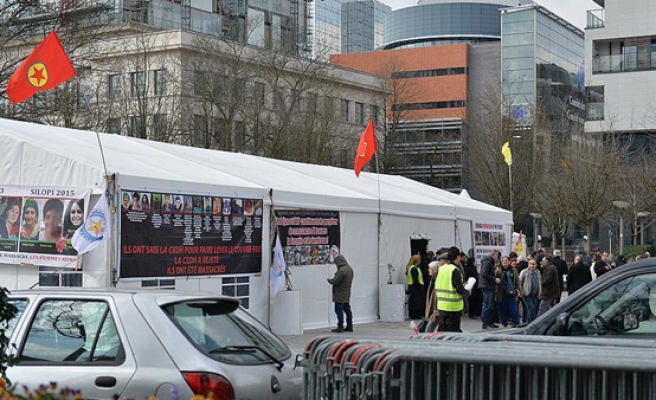 The Belgian government allowed supporters of the terrorist organization PKK to pitch tents before the Turkey-EU summit in Brussels on Thursday, according to the Anadolu Agency correspondent on site.

The PKK supporters set up their tents near the EU Council building.

Turkish Prime Minister Ahmet Davutoglu will join the summit in Brussels on Thursday.

EU heads of government are gathering in Brussels to discuss Turkey's proposals on the refugee and migrant crisis. Davutoglu is representing Turkey at the meeting.

One of the terrorist organization leaders in Belgium, Remzi Kartal, held a press conference to criticize Turkey's anti-terror operations in southeast Turkey, said the correspondent.

Belgian government ministers made no move to interfere with the tents, although last week they had pledged to cooperate in fighting terrorism.

When asked by the Anadolu Agency correspondent about the possible security risk of the tents’ presence during the summit, Belgian Interior Ministry officials had no comment.

During a visit by a Belgian delegation last week, Turkish Foreign Minister Mevlut Cavusoglu criticized Belgium for tolerating terrorist organizations such as the PKK or the terrorist Revolutionary People's Liberation Party-Front's (DHKP-C), saying that they deserve to be treated just like Daesh, and that failing to do so shows a double standard.

In response, Belgian Deputy Prime Minister and Foreign Minister Didier Reynders said, "Legal pursuit and investigations are (being) conducted by federal prosecutors in a detailed way against the PKK and DHKP-C in Belgium. There will be four trials in a short while. Our way is slow, but Belgium is one of the active countries in (anti-) terror and terrorists' processes."

Belgium is one of the European countries where the PKK and DHKP-C are very active.

Several PKK leaders live in Belgium, and there are also pro-PKK TV channels in the country.

The last anti-terror operation by Belgian security forces against the PKK took place in 2010.

Apart from Belgium, the PKK is also active in many EU countries such as Germany, Austria, Denmark, France, the Netherlands, Sweden, and Greece.

Since the PKK – also listed as a terrorist organization by the U.S. and the EU – resumed its 30-year armed campaign in late July, more than 290 members of the security forces have been martyred.

Though the PKK is on the EU’s official terrorist organization list, Turkey has complained of member states’ indifference to the terrorist group.

Belgium has held numerous anti-terror operations against other terrorist organizations such as Daesh, and cooperated as an EU member state with France to find the perpetrators of last November’s terrorist attacks in Paris.

Daesh claimed responsibility for the Paris attacks which killed 130 people. Many of the attackers had links to Belgium, and police carried out a series of raids in Brussels in the days after the coordinated attacks.

More than 30 suspects have been detained and eight have been arrested so far.

EU foreign policy chief Federica Mogherini said this week that the European bloc regards the PKK as a terrorist organization in all respects, with its activities both inside and outside the EU.